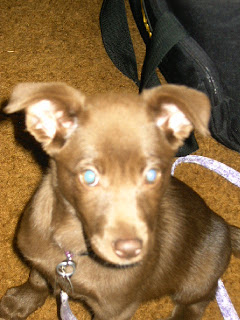 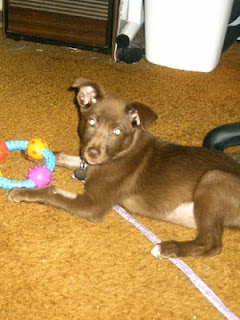 Hi. I woke up around 6 to let Hazel out, and she had lasted the whole night! She hadn't even ripped up the paper. We went to bed around 12. That is great for an 8 week old, according to the literature that I have. I was so proud. I thought my son would get up around 8:30, but we both fell back to sleep. Around 10, son got up and saw that Hazel doesn't like the wallpaper in the kitchen. I don't like it either, so I guess she has good taste, but it was a small mess. We had a family party today, and had to leave Hazel alone for a few hours. Son drove back to check on her, and she was fine after 2 hours. He went back to the party, and when we got home 2 hours later, she had again attacked the wallpaper and the newspaper. The paper was dry, though. The rest of the day was spent trying to get Hazel to play with her toys, and not to chew everything else!! I forgot about this stage. The last time I had a puppy was 14 years ago.
Anyway, she sits on command, and son taught her to go up and down a flight of stairs. I was carrying her up and down (lots of cuddles on the way, lol) but had tried to get her to do the last stair up and the one into the basement apartment I use, and was successful there. Son got her going up and down the whole flight! We felt this was an important lesson for this week. I work an 8 hour shift 2 days a week, and she won't last that long alone. My mom and dad are upstairs, though, and can let her out if Hazel can do the stairs. I don't want them carrying her, since they take stairs slowly. She only weighs a few pounds, but it is a worry for me. Mom has really been more active in learning about Hazel than she was Taylor. Mom is petting her and offered to walk her on a leash in the yard on Tuesday for me! I am so happy. I was concerned, but I think this will work. As soon as Hazel gets her final shots and can go around the block, I think my dad MIGHT just take her for his walks. He likes teaching "heel" but didn't want me to get another dog. Mom and Dad are both over 80, so this really is good of them, and for them!
I also got her a "Kong" tennis ball with a squeeker. She will chase the ball and bring it back! Fetch already! I think she is such a smart dog. I might be biased, but she has only been with us for 3 days!
So, tonight, I used her leash to limit her room in the kitchen, so she shouldn't be able to reach the wallpaper. I had just used a gate last night. She got mad at the leash and started tugging, though, and barked and growled for the first time. We hadn't heard anything from her except for some noise when she yawned! It is so cute to hear puppy bark, but I think I need to get a crate. Hazel is really teething and needs to be protected. I didn't have one for Taylor, and she did well without it. Hazel is a little more frisky, though. So, off to the pet store tomorrow. I know the cost will be worth it in the long run, but I still hate that wallpaper!
These pics were taken Sunday night. Doesn't she look bigger??? I think she grows during every nap!
Posted by teachpany at 11:58 PM

She is just sooo cute!! So glad she's adjusting to the family and vice versa. It's nice that everyone is pitching in to help.