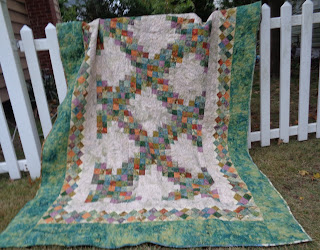 I'm so excited.  I love getting things done, and lately, it's not often I get to finish and celebrate it.  I may have mentioned that I'm the caregiver for my mom, who has dementia.  I  live with her, and my sewing studio is above her bedroom.  She hasn't been feeling well over the last few months, and goes to bed early, which means I can't sew.  Well, I can't quilt or cut stuff out.  I can piece tops, using the vintage machine in my bedroom in the basement.  So, things get started, but not much gets finished.  Her memory issues are progressing faster than anticipated, and she needs more companionship, which means I can't go up to sew, unless she's having a good day.  I have to see if I can find someone to come sit with her a few hours a week.

But I digress.  I do want to share a quilt I made for my friend, Christine's daughter.  Megan and Joe were married in April.  I had hoped to get the quilt done for the wedding, but other things had priority, so I did get most of the top done, and then waited because I ordered more fabric for the outer border.

The top was done and pinned, but I didn't have time to quilt it.  I do all my own quilting on my Viking Sapphire 850.  It has nice throat space, and the table I had built for my studio here offers lots of space, so I can quilt large quilts.  This one is a large twin size, mostly because Joe is over 6'2" and I wanted to make a lap quilt they could snuggle under.

I used Lake Life, an older bundle from Island Batik.  Christine was an Island Batik Ambassador, and had quite a bit of this left, so I added the neutral background, and border, and was able to have enough of the colors to make this.  I used the Triple Irish Chain book from Quilt In A Day.   For the main part, I followed the Scrappy version, and for the Seminole border, I followed the planned scrappy.  I didn't have enough of the main cream for the top and bottom of the border, so I was careful how I planned it, using a light sage for the outer pieces.  It was a little bit of a challenge, but I do love thinking and planning. 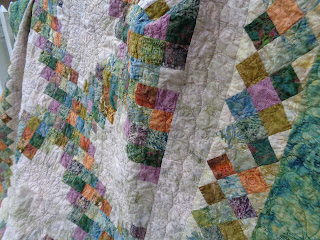 I used a leaf circle stencil to quilt the 7 cream center blocks, and did a variation of interchained circles or orange peel in the pieced chain blocks.  Instead of hitting every corner, I actually made circles.  I didn't want to over-quilt this because I wanted it snuggly, not stiff.  I used Warm & Natural batting and had a cream floral wide backing for the back. 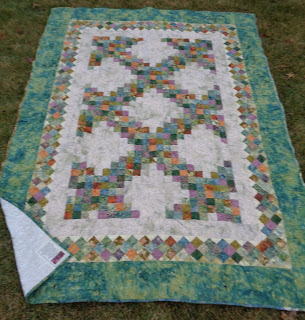 For the cream first border, I did a vine chain design.  The Seminole border has the same circle shape as the blocks, and the outer border has feathers.  I used Aurifil 50wt cotton 2325 Linen, my big cone, for the piecing and the quilting of all except the outer border.  I used 50wt in Very Dark Grass Green 2890 for that. 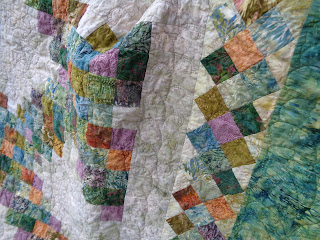 Fun fact for Megan and Joe, there are animals in the outer border.  You may find a moose or deer or a mountain cat, if you look carefully.  They are hidden among the forest and water design.

So, I know I've mentioned this before, but being an Island Batik Ambassador is just wonderful.  The fabrics really are the best, and the colors in the collection are always so pretty.  I love working with the fabrics, too, because there is little to no fraying.  Being an Aurifil Artisan is also the best experience.  I've loved Aurifil since I tried my first spool more than 6 years ago.  It's awesome, and the colors are always perfect.  Would you guess that a tan thread did such a good job of "hiding" among all the colors of the chain blocks?  It did.  And the green in the border just blends in, too.  I wanted the fabrics to shine in this.  It's just the way I had hoped, and it's done.  I just need to get together with Christine, Megan and Joe to deliver it.  We're working on that.