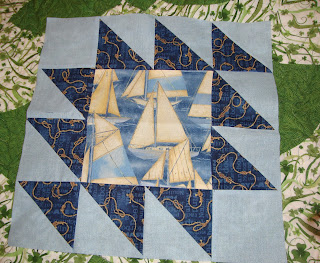 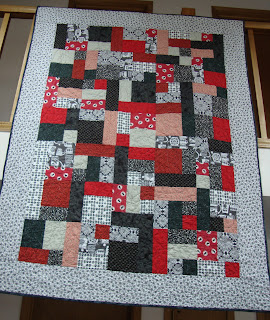 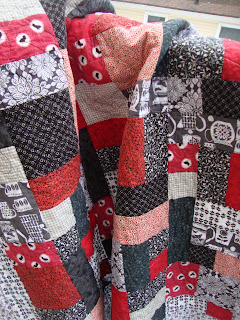 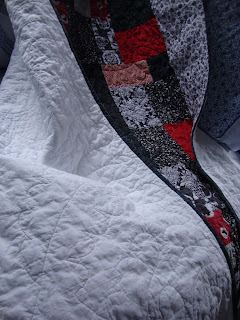 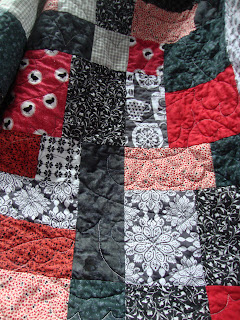 This week's projects will include some alterations on dance school dresses, and the Aurifil block of the month, and quilting the blue and yellow quilt from last week!  Thanks for visiting!
Posted by teachpany at 2:56 PM No comments:

Want a look at my design wall??

I am using the Vivienne Collection from Timeless Treasures, in blues and yellows to make the new Hole In The Wall Quilt from Quilt In A Day.

The photo was taken to show the placement to some friends, so I can get different opinions on placement. I love technology!  I mentor Sit and Sew at Enright's (http://enrightsfabric.com/) on Thursdays, and love asking Bernie and Sue for their opinion.  Sometimes the extra eyes notice something, or suggest better color placement.  They are both wonderful with colors!  Paul loves to give opinions, too.

But this time, I wanted to get the top together before Thursday, so I can pin baste the layers and quilt it over the weekend 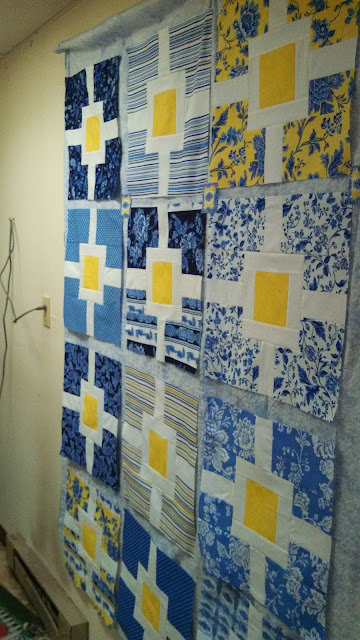 The top will be finished tonight, and I will decide tomorrow if I want to add a border.  The quilt will be a really nice lap size, and it's much prettier in person.  It's a very smart idea to take photos of quilts as you go, though.  You can check the placement, check for errors (they show up better in photos than in real life! ) and sharing by text or email is a great way to get the opinions you need on days you can't sew with friends.
That wall space is in my laundry room, which is next to my sewing area.  That plug on the wall is for the iron.  The washer and dryer are directly to the left, with just walking space between the and the wall.  It's tight, but a great place to tack a really cheap flannel backed vinyl tablecloth, and place the blocks.  It works!  It's not perfect, because you really can't step back and see the whole wall, but it's better than laying it on the floor. Taking a picture helps, but again, it's tricky to get a whole quilt this size into a camera frame.  The design wall at Sit and Sew is much better!  Sometimes I actually plan what to make when, just so I can play on that wall!
I'm linking this post up with the Quiltsy Blog Work in Progress.  There is a link on the right for that, and for my store.  This will be listed soon!  Thanks for visiting.
Posted by teachpany at 3:30 PM 2 comments:

The Polls are open!  Go vote for your favorite Quilter, Teacher, Author, product, etc.  It's fun, and you can win prizes.  Give yourself a few moments, and choose your favorites.

Help SewCal Gal recognize the leaders in the Quilting industry, and make it better for everyone!

Voting is open through February 28, 2013.  SewCal Gal put tons of work into this, and has some great prizes.  Please support her efforts, and your favorite quilters!  Have fun!

Click on the gold machine picture to the right of this post for an easy link to the fun!

Thanks for your time!

Posted by teachpany at 8:36 PM No comments:

First, here's the finish!
Zig A Zag by Eleanor Burns is a great pattern. If you like using strip packs (or 2 1/2" strips of your own fabric) and want something modern and trendy, this makes the perfect lap throw, and can be adapted for different sizes.  Her instructions are perfect!

Here's my version.  I used a Viola strip pack (YUMMY) by Island Batiks, as well as cream strips from Meringue by Timeless Treasures, plus some really pretty batik yardage I had.

The finished quilt measures 66 by 73 inches.  It's so soft and the colors are so pretty.  I loved making it. 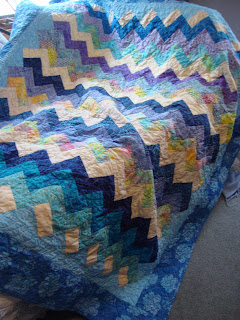 I used Aurifil 50wt Mako in a beautiful silvery grey, 2600, that absolutely melted into the seams.  The color was perfect to use in this quilt.  With all the colors in the top, you can't see the thread in the seams.  I really do love piecing with Aurifil.  The top was quilted with Superior's King Tut thread, in a blue variagated, but I did use Aurifil 2315, a perfect match to the back, in the bobbin.  5 bobbins used in the quilting alone.  The zig zags are accented with a leaf and vine design, and I quilted feathers in the borders. 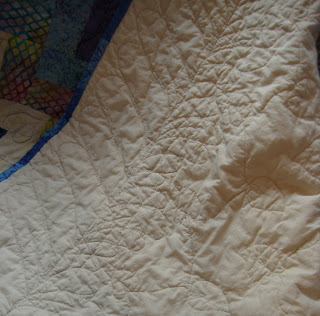 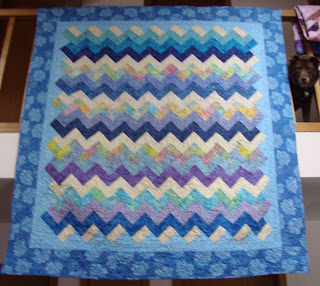 Close up of the colors.  Sweet! 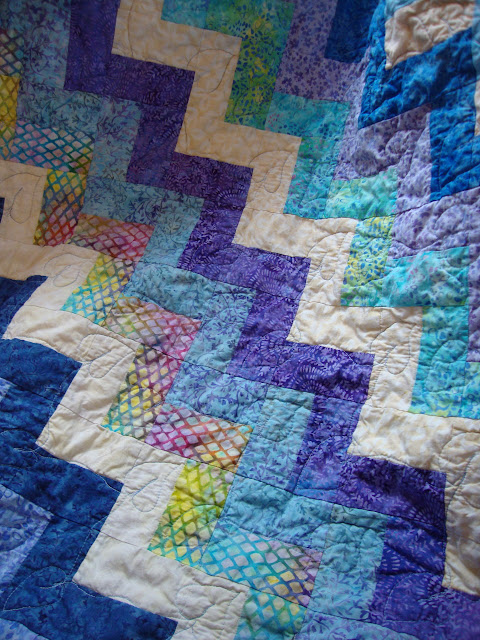 I listed this in my Etsy shop.  https://www.etsy.com/listing/122758222/lap-quilt-batik-blues-pastels-zig-a-zag
Other news today:  It snowed again.  Oh, wait, that's not news in the Pocono Mountains! It's a daily happening sometimes.  This week, we've had a new dusting every day, so we're about up to 4 inches, and will be getting more before the weekend.  The light stuff is fine with me.  I just need to sweep the deck, but not shovel the drive.  The first warm day will melt most of it.
I got an email that I won another Fat Quarter bundle from Windham, so I'll post pictures when I get it.  I also got an email that I won a quilting E-book using Fat Quarters.  Perfect, right??  Then I found out two of my bids on the Operation Homefront auction by SewCal Gal won, too.  So, I better get more quilts done with all these great fabrics coming in!  Better stop at Pocono Sew and Vac, too, to get more Aurifil.  ﻿
Posted by teachpany at 8:23 PM 1 comment: