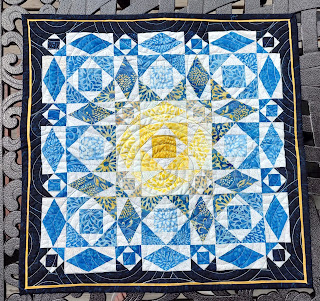 First, let me say I know you're surprised that it's before the end of the month.  Yes, my Mini is finished! 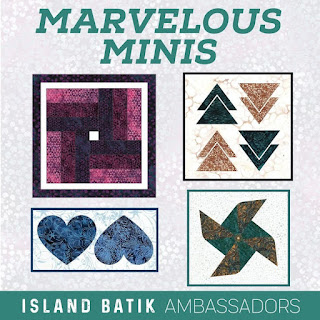 This month, the Island Batik Ambassadors were asked to make a mini quilt.  Anything went, as long as it was less than 24" square.  If you've seen the others already shared, you'll notice a wide variety of projects, from small quilts to clocks, with piecing, applique and a little fun stitching, and lots of great quilting.
In my case, I've had a few challenges shared by my quilt guilds, too.  One was for a mini, using yellow and blue, and to measure 20" square.  So, I thought a bit, and decided to use some of the remaining fabric from the Petals Provence collection I used last November for the large Storm at Sea quilt. I used the Accuquilt GO! Storm at Sea BOB die for that, but the blocks would have been way to large for a mini.  Most minis require the blocks to be under 4'.  So, I went to EQ8 and played with a few designs, but the best one was to use the Storm at Sea blocks.  To get the design similar to the large quilt, I needed an uneven number of larger blocks, with sashing (the diamonds and small square in a square blocks) around the larger square in a square. 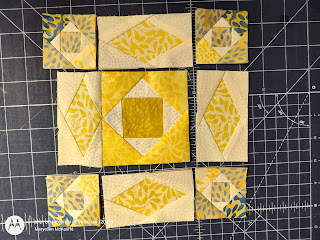 The measurements for the number of squares, plus a small border, would mean that the pieces needed to be done on foundation paper, because they finish in 1/8" increments.  I enjoy this technique, as it makes piecing pretty easy, once you get the hang of the process.  I've even experimented with the "not sew on the paper" style, but felt that the smallest pieces in this would not be the best I could do unless I actually used the foundation.  The smaller square will finish at 1 5/8" and have 9 pieces.  The inner Almond triangles start as a 2" square cut on each diagonal, and are trimmed after sewing.  Tiny!!
So, set up the machine with good thread, a Schmetz Chrome needle, a clear view foot that has a little red arrow (to help find the line on the paper) and use a business card to fold the paper on the stitching lines.  Have a wooden iron to press the pieces back, a pair of small snips that also cut fabric handy to trim some of the seams smaller, my Add a Quarter ruler, small cutting mat, and 28mm rotary cutter.  I set my stitch length to 1.7, so it's easier to pull off the paper and the seams are secure.  Connie Kauffman's book was great in teaching me how to do this.
I was so happy when I had more than half of the quilt pieced. 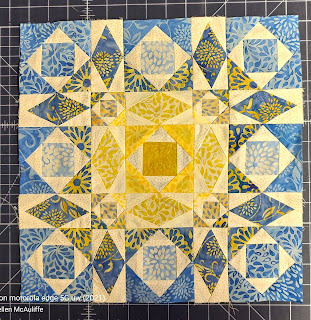 177 Pieces down, 168 to go.  The 168 were only the outer diamonds and small squares.  The large blocks were done!  The challenge was to use the scraps and get the colors to radiate the way I wanted.  Most of the darkest blues were used in the large quilt. 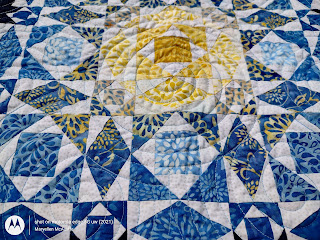 I placed a piece of Island Batik Solid White on my Long Arm, Handi-Quilter Amara, and decided to use Raindrops on Water panto for quilting.  I loaded in Aurifil 40-3 in a blue variegated, with pale grey in the bobbin, and set up the design. 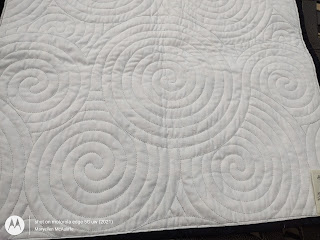 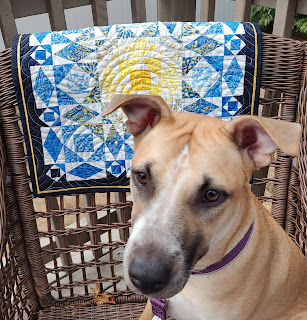 Heather enjoyed getting her photo taken with the mini quilt.  She's now about 7 months old. 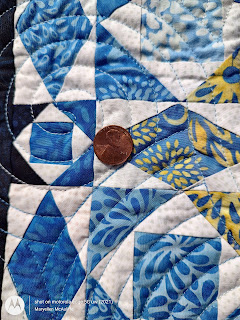 US Penny for scale. 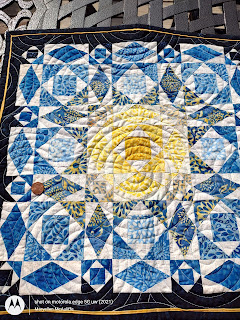 Did you notice the penny again?
I also decided to show the difference between the first Storm at Sea, also known as After the Storm (the sun shines, with blue skies), and the new mini version. 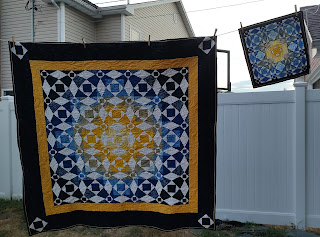 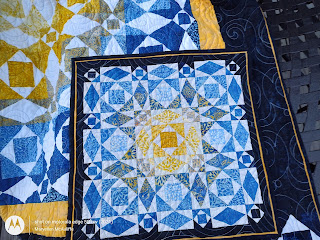 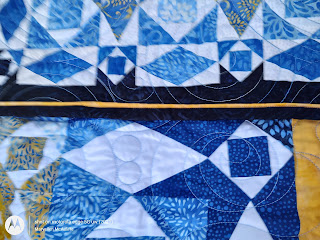 Christmas in July with Accuquilt GO! Tree of Life die

Yes, I'm late blogging this.  Things have been a little frustrating, but okay.  Puppy training is hard!  She's almost 7 months, but still learning.  There've been other things, too, but I'm trying to move forward a little each day.  I had some big secret sewing projects to finish in July, as well, and can't share that until January or February. 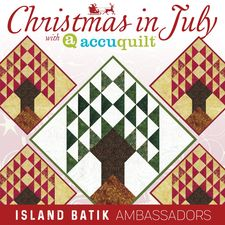 The July challenge was for the Island Batik Ambassadors to use the Tree of Life die provided by Accuquilt for a project which was to become a gift for someone who needed cheering.  In my case, I gave it to someone who is doing all she can at work and then caring for her mom, who has Alzheimer's.  I've been there.  My mom is still hanging on, in the nursing home, and no one knows how, except that she's still eating.  I appreciate that the staff have taken over my role as caregiver, so I have some breathing room, and can go back to being a daughter.  My friend Carol is still playing both parts.  We were to meet for a quick meal, and I grabbed the finished quilt and decided to give it to her, almost spur of the moment.  I wasn't sure who I could give it to, until we made plans to meet.

My project:  I went to EQ8 to see if they had the die shape already as a block, and it was close enough.  I set the design on point with one block measuring 14", and played with some colors.  I often use just the solids when I play, as I know the Batiks will offer a little more depth and texture to the design.  I was thinking of using some 10" squares left from another project, but it just didn't seem like I had enough. I opted to use some of the 1/2 yard Basics and Blenders Island Batik includes in our Ambassador boxes (did you see my last post, showing how stuffed the 34lb boxes were??) I have a good variety of Basics. 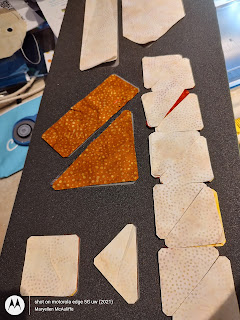 I decided to make it look like a tree in Autumn, with the variety of colors.  Some of my favorite trees are along Rt. 380 in Pennsylvania.  The road cuts between state parks, game lands, and small towns on the way from Mt. Pocono to Scranton, and the colors in the fall can be stunning, including multiple colors on one tree.  So, my color choices went to the memories of those drives. 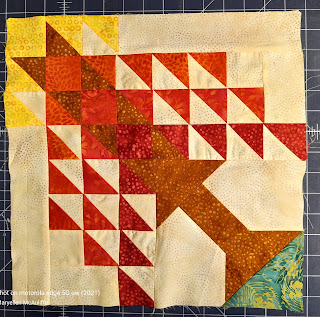 The base of the tree is surrounded by leaves that have started to fall, mixed on the green forest floor.  At least that's what I was trying to show. Shades of red, scarlet, orange, magenta and yellow can be found in the fabrics, against a cinnamon colored trunk.  I used Almond for the background, as the sky blue I was considering just didn't look right.  But in moments (after planning the size of the section to allow enough of each color) the board was loaded with fabric and pieces were cut.  A little later, the tree was done.  First, I assembled the half square triangle units, and the base and trunk.  A little time later (after making sure, many times, that I had my design correct according to the EQ8 printout, it was a block.  I think planning and prepping the fabric took more time. 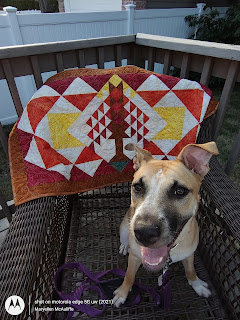 My idea on EQ8 was to frame the tree with additional half square triangle units, and the shapes were not the size I could have used for a die, but were easy enough to piece.  Of course I used Aurifil 50 wt for it all, and a Schmetz size 12 needle. 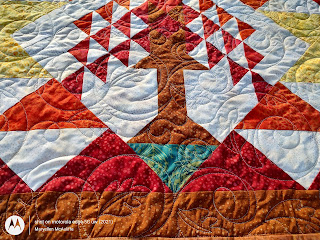 I added a border of the cinnamon I used for the tree, for the final frame, and placed it on my Handi-Quilter Amara with Prostitcher, and picked Leaves in the Wind panto, and a light tan Aurifil 40-3 wt thread, which added the perfect accent.  I love 40-3.  It's perfect for long arms, and adds a great touch to the top.  Backing is some Almond from Island Batik. 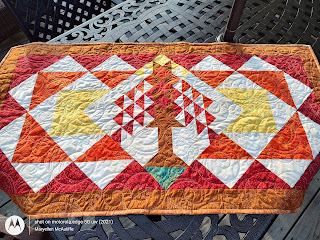 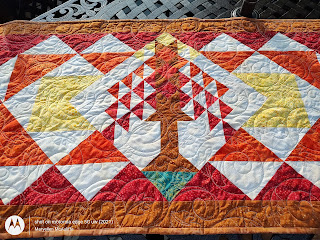 Finally, with more Cinnamon for binding and a quilt "made by" label, it was ready for photos.  Heather did a good job modeling with it, don't you think?  Okay, it took about 15 photos to get 2 that looked good, but she gets a treat for trying.  As I said, puppy hood is a challenge.
Back to my friend.  She's my Sister-in-law's sister-in-law, and we've known each other for years.  Carol is so sweet, and I know where she's going with caring for her mom, and dealing with siblings regarding that care.  She's also working full time, and the fact that she's making time to meet with me is something I treasure.  So I hope she treasures this little table runner, and that she smiles when she sees it on her table this fall.  I also hope it makes her mom smile.  My mom loved seeing the colors of little quilts on the table, and I would change them for the season.  She liked the texture of the quilts, too, so I'm hoping Carol's mom does, as well.  A little bit of color to brighten their day.  Sometimes, as a caregiver, it's enough to make you think that you can get through it.  Alzheimer's is hard. She deserves this gift. 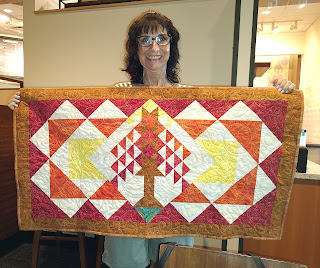 Carol getting the quilt!  Delivered August 6, so not too late for Christmas in July.  Like Little Christmas, lol. Epiphany in August, maybe.
Thanks for stopping by.  Stay tuned for the Mini challenge.  Check out the Ambassador blogs for some that have been posted already.  Mine is ready to quilt, so I'll be writing again soon.
Maryellen
Posted by teachpany at 1:38 AM 2 comments: