A few years ago, during a play at Holy Family in Nazareth, I sat next a woman named Joan. Joan and I had a mutual friend, Deb, (whose daughter was in the play) who suggested we sit together. Joan discovered I had made the costumes (with much help from parents) and was praising my work. She asked me what my dream machine would be, suggesting a factory machine. I said I had always wanted a treadle machine. She told me to stop by her house the next day, and showed me a cabinet, and then put it in my car, after I promised to repair it and get it working, and not to sell it. It was a gift. I gave her a shawl to thank her.

So, I went about finding information about this unusual cabinet. Yes, it was a treadle machine, but... A cabinet? Yes. This is a rare Parlor Cabinet sewing machine, made for Mongomery Ward in the early 1900s. The Minnesota was one of many machines they sold, trying to copy Singer's success. I did some research, and had the exact info, (can't remember the exact year) but it was old. It was missing parts (the bobbin, bobbin case, and bobbin cover, among other things) and the cabinet was damaged. There was an awful stain on the top, it wasn't square, the door latch was broken (and what was with that knob??) and ... Quite a project, but I had the internet, and prior knowledge on refinishing furniture. Sooo... 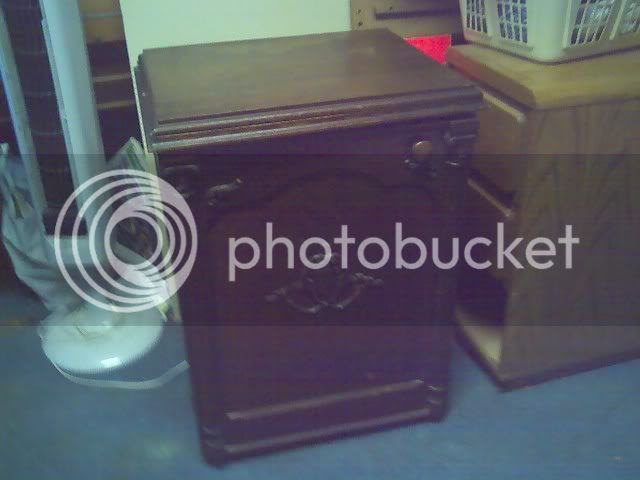 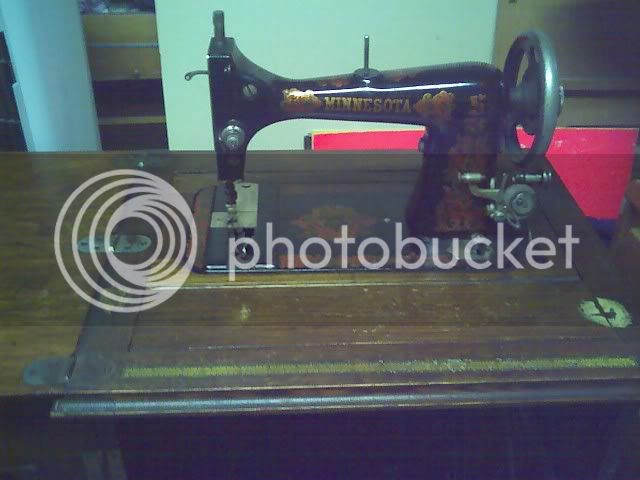 I found the parts I needed at a sewing machine store on Long Island, where I had previously bought a machine. It was a little surprising, considering I did a US search and found it locally. I cleaned and polished the machine. I was surprised by the decals hidden by the years of gunk. I got it working. The next job was to tackle the cabinet. There was a built in tape measure in front of the machine, and I figured any chemicals may damage it, so I asked for help at Home Depot. They recommended I restore the finish there, but would need to strip the top because no one could figure out what caused the stain, let alone what to do about it. I was able to get off that weird white stain next to the machine, and the rest of the cabinet seemed to glow with a little elbow grease and product. 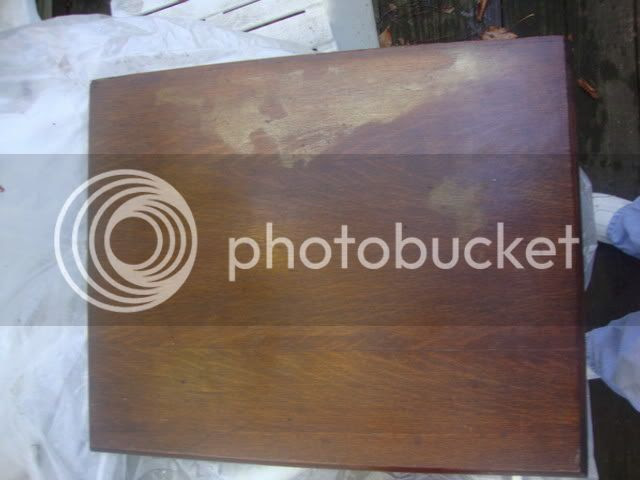 Um, yeah, that looks bad. They had tried a number of things on it before I took the picture. I've used a spray-on chemical stripper before, so I got that ready, put on my grungiest clothes, got plastic scrapers, rubber gloves, lots of paper towels, a drop cloth, water, and sand paper and got to work. The stain wasn't into the wood, so I was able to get it ready to restain after one try. I did strip the top and bottom, since I figured I would need to do it if I got any drips (knowing me, yep,) 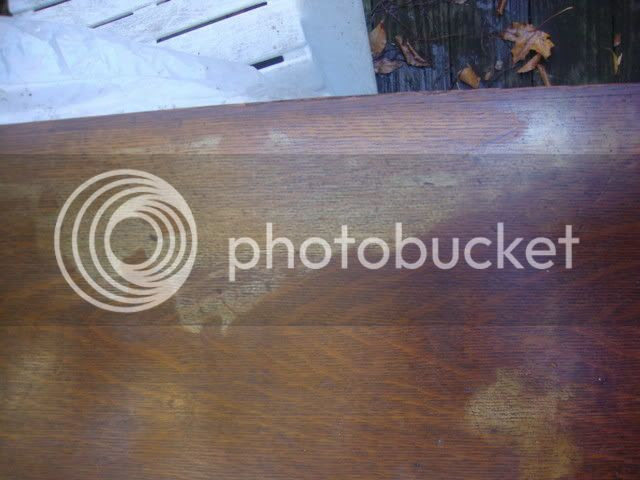 After some stain and some polyurethane, here is the finished result. I am pretty proud of it. It isn't perfect, but what would be after 100 years? I didn't want it to look new, but good for its age. And, it works. I do need to do some adjustments, but if I lose power, I can still sew! I replaced the weird wood knob with a cool vintage looking dark silver knob. 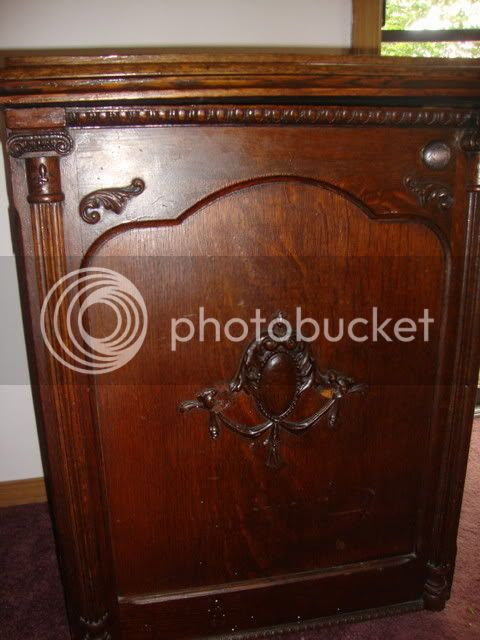 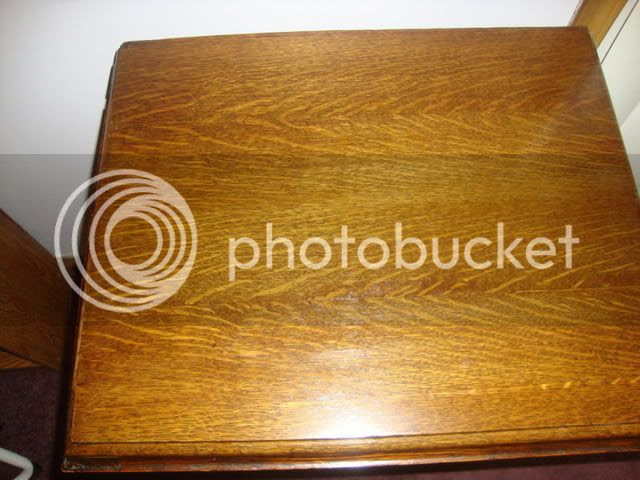 That is the cover, where the stain was. Look at that beautiful grain!! I love being able to discover something like that with some good chemicals and some hard work. 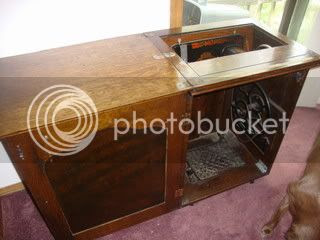 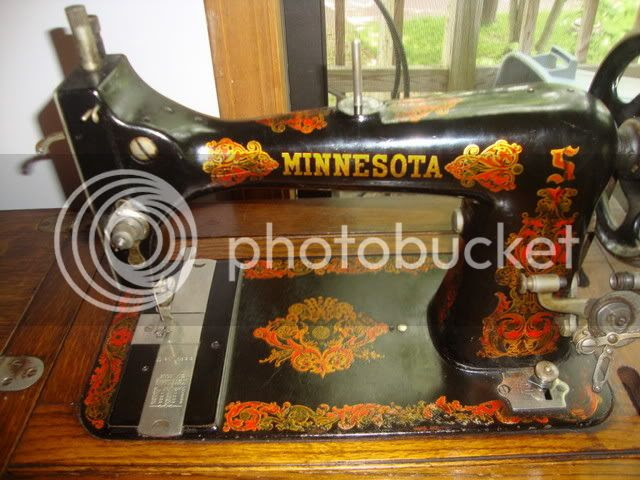 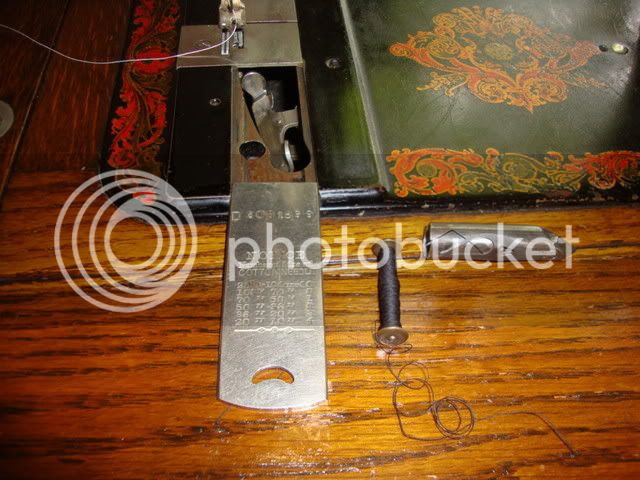 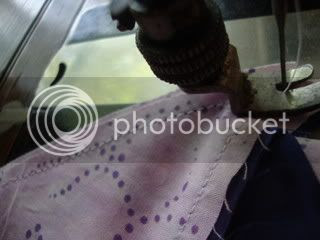 Hazel approves, and says it's time to play with her instead of the machine. 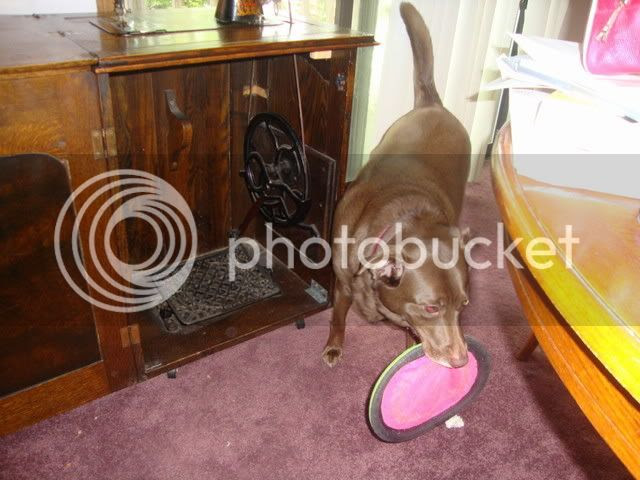 Posted by teachpany at 3:12 PM

Maryellen, you did a wonderful job. It is beautiful and all the more special since you saved it.

Wow! What a wonderful job you did and thanks for sharing the pics with us. I remember as a young girl sitting on the floor and operating the pedal for my Mom when her legs got tired.
What fun!