I am single, and hoping to find someone wonderful.  I use Eharmony for internet dating, and met a man named George in July.  We're friends, and I don't know where this will go, but he's a special man.  We have great conversations, and lots in common, but he's in Minnesota and I'm in PA.  We were hoping to meet in September, during a layover between his flights to Greece, but TSA thwarted that plan.  He's originally from Greece, and has a great accent.  As we started this friendship, I began learning more and more about his beautiful homeland.

And, since I'm a quilter, my mind is always thinking of things to sew and quilt.  I wanted to make something that would celebrate his heritage and culture.  He didn't know what quilting was before we started talking (although he owns some "quilted bedding").  He was interested in what I do.  One night we were talking about the Greek Flag, and I mentioned the Greek Cross quilting block.  I had done one for the Quilt In A Day Facebook challenge.  He showed me a picture that broke down the flag into sewing sizes, using a 10" Cross block, with 2 1/2" stripes.  I thought "This was too easy!"

I checked with Missouri Star quilt company, and they had the perfect Blue Sky by Moda for the flag.  I found some great white cotton sateen, and set to work.

I wanted the flag to look like it was flying,and although I haven't done a "bargello" style quilt, I've read enough directions and seen enough flags that I figured I could just wing it. 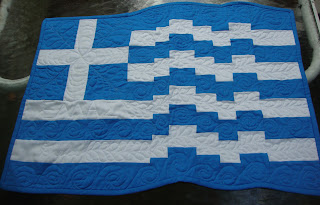 I made the 10" square Cross square, and cut strips and sewed them together for the stripes.  I then just cut sections off the strips, moved them, and sewed them back together to give it the illusion of movement.
George and I spoke again, and I discovered that the country Americans call Greece is actually called Hellas, (El las).  I actually wrote this in Greek letters and then wrote Greece in script, and stitched that into the stripes under the Cross block. 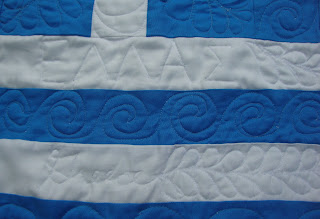 I also quilted waves in the blue, to represent the waters around Greece, which is one of the things the blue in the flag represents, plus feather leaves in the white.  It measures about 28" wide by 20" tall,
It was made to honor George and his country, and to remind him of our friendship. 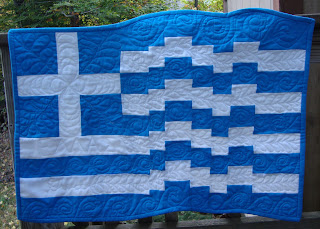 I really had fun making this, and deciding how to quilt it.  I was careful with the curves, because I didn't want to have to use Bias cut binding, but I think it came out really well.  As far as I could tell, it's the only Greek Flag that's quilted on Etsy.  Although George has the original, I could make more if asked.  I'll probably do an American version soon, too.

Posted by teachpany at 6:17 PM