Leona's Quilt and a recent win.

Hi.  First here's the win.  I do quite a few blog hops, and I'm always surprised that I win.  This is a nice prize. Quiltmakers 100 Blocks is a magazine that has 100 fresh quilt block designs, as well as quilts using those designs.  The blocks come from some of the biggest names in the quilt world, so it's always fun to see their ideas.  I won a magazine, and was surprised to find a bundle of Fat Quarters from Northcott's Starry Night collection in the box today.  I love these fabrics, so now I have the beginnings of a project, and lots of inspiration from the magazine. 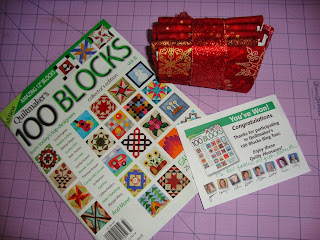 Now, about Leona's quilt.  My cousin Liz's mother-in-law was Leona.  Leona was a quilter, a member of the Long Island Quilters Guild and a quilt shop owner on Long Island.  I don't think I met her, but my parents always spoke highly of her and Larry's father.  Leona passed away last August, after a prolonged illness.  She hadn't quilted in over 6 years.

Liz invited the girl cousins to a weekend at her beach house on Rhode Island in early September.  Liz asked me to look at two quilt tops, and suggest a way to finish them.  Leona had made the tops years before, but they were only tops.  This black one had been washed, too, so there was quite a bit of fraying on the edges and in some of the seams, and there were quite a few patches that were severely faded.  Liz wanted to be able to use this top as a table cloth.  I said I would be happy to fix the faded blocks and finish it for her.

Maybe I should have taken "before" pictures, but I didn't think of it.  I went through my fabric scraps and looked for other black floral prints that would work with this.  I needed to replace about 14 patches, so I needed a variety, so it would look like the others in the quilt.  One thing I noticed is that some of the fabrics, including the border solids, are poly/cotton blends, not 100% cottons.  Most of my contemporaries would not mix fabric types in quilts, because of shrinkage in 100% cottons.  I find it interesting that Leona mixed fabrics.  My second quilt was a mix, but that was because I didn't know 24 years ago what I know now.

My friend Bernie helped me "un-sew" the patches and border.  I cut an assortment of 3 1/2" squares from the replacement fabrics, and stitched them back in, re-attached the border, basted it to the backing and batting, and quilted a simple diagonal grid in the center.  Liz had said most of Leona's quilts were tied, so I didn't want to over-quilt it.  I wish I could see more of hers.  This may have been a sample top for her shop.  Liz said Leona taught classes, so this may have been one for a class.  I did add a simple feather border.  I hope Leona would be pleased that her top is now finished, and will be treasured and used by Liz. 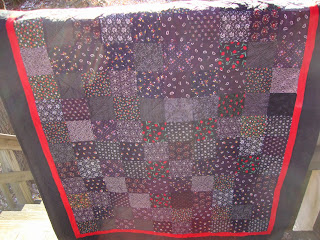 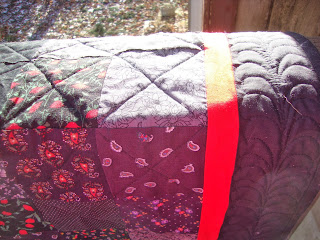 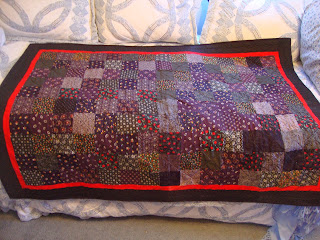 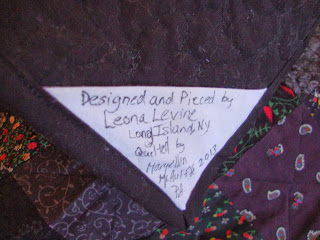 So, can you find the blocks I replaced?  They are in this photo.  I can only notice them because they include one fabric that is similar to one of the original fabrics, but different enough for me to locate.  Any guesses? 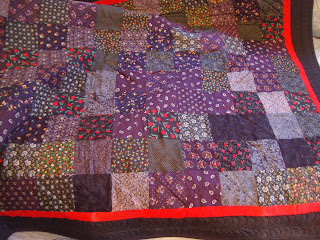 I'll wash this again, and send it to Liz.  For some reason, the black solid I chose for the backing and binding attracted tons of lint.  I wanted to prewash the backing, since Liz had washed the top.  I didn't want the backing to shrink after quilting, as it would distort Leona's work.  I usually don't wash my fabrics before quilting, and hadn't noticed the solids getting so "clingy".  See by the label?  I wish I knew which brand of solids I bought at JoAnn's for this.  I would not want to buy it again.

I'll let you know when Leona's other quilt is done.  I'm hoping Liz finds more and lets me finish them.  Leona deserves that, and I'm happy to help.

Posted by teachpany at 3:01 PM

I've had that problem with solid blacks. Now I use grey on black prints or almost black batiks.
Lovely job on the repairs and finishing

It turned out lovely. I can't tell the one's that you replaced. Wonderful job!