Many of my quilts have a story.  Sometimes it's short.  Something like "I love this strip pack and these colors.  I think it will be pretty in this design."  and then I play with color order, borders, and quilting design.  The end.

Sometimes it's longer, or has an epilogue.  One of the "easy" quilts I made was purchased for a sister's new baby.  It was delivered to the family in time to take it to the hospital, and the new baby was wrapped in it. 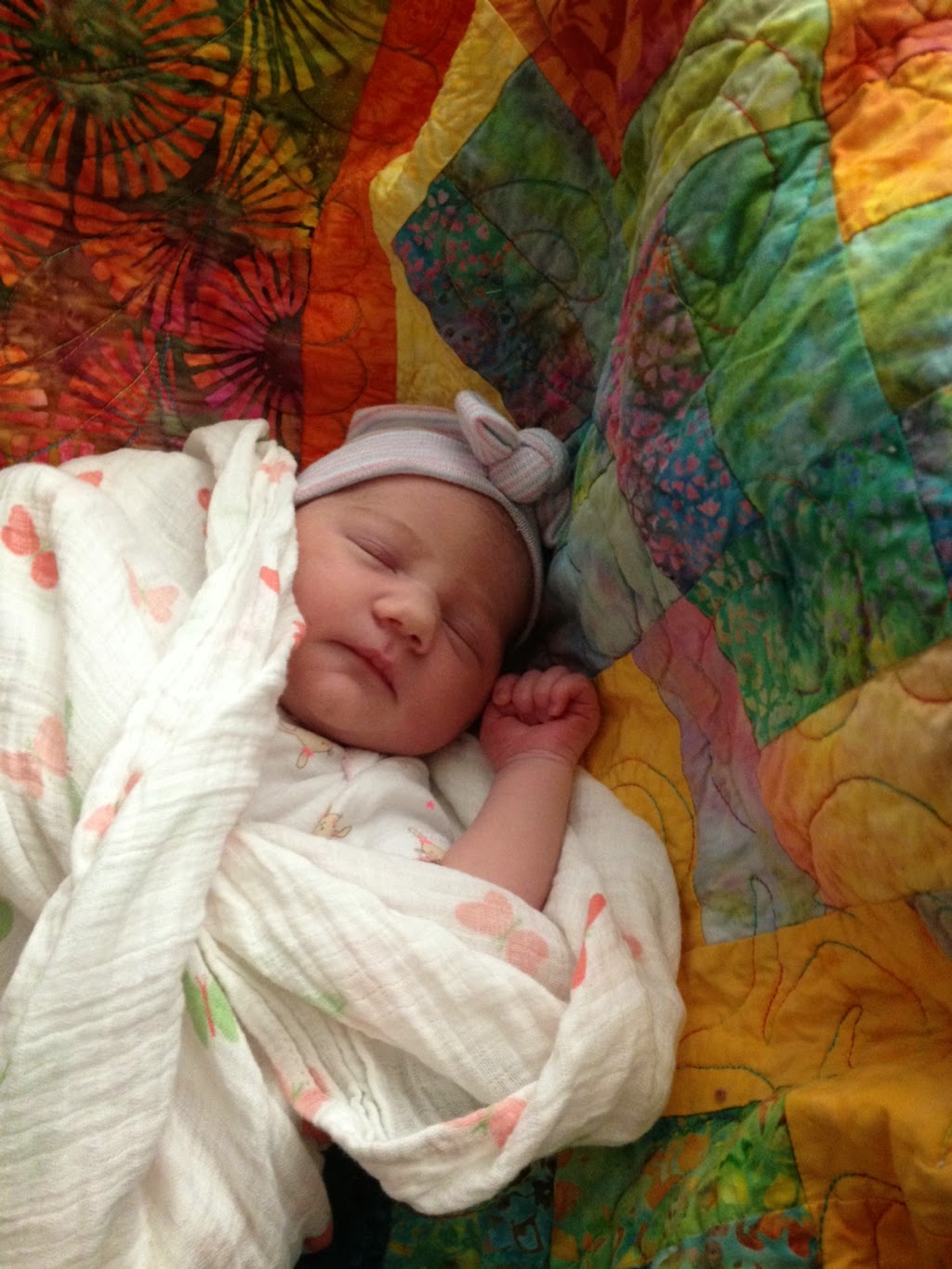 Other times, a quilt begins with a story.  This quilt started that way. 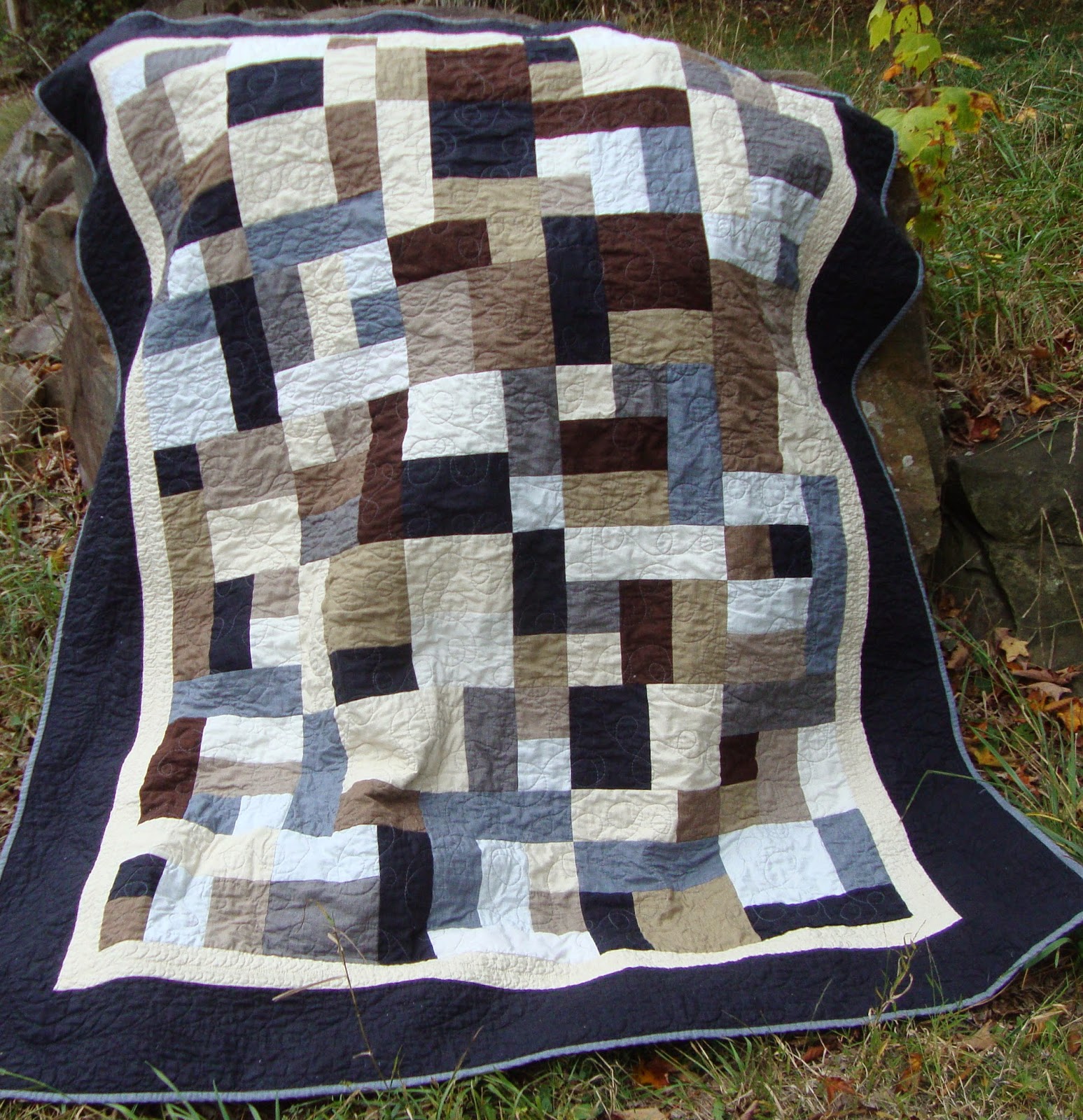 This one started with the thread.  Alex Veronelli from Aurifil posted on Facebook about a new thread.  He wanted people who would be willing to test it.  I volunteered and received a package of linen thread.  It's a thicker weight than the standards I use (50wt and 40wt), but I wanted to try it by quilting with it. 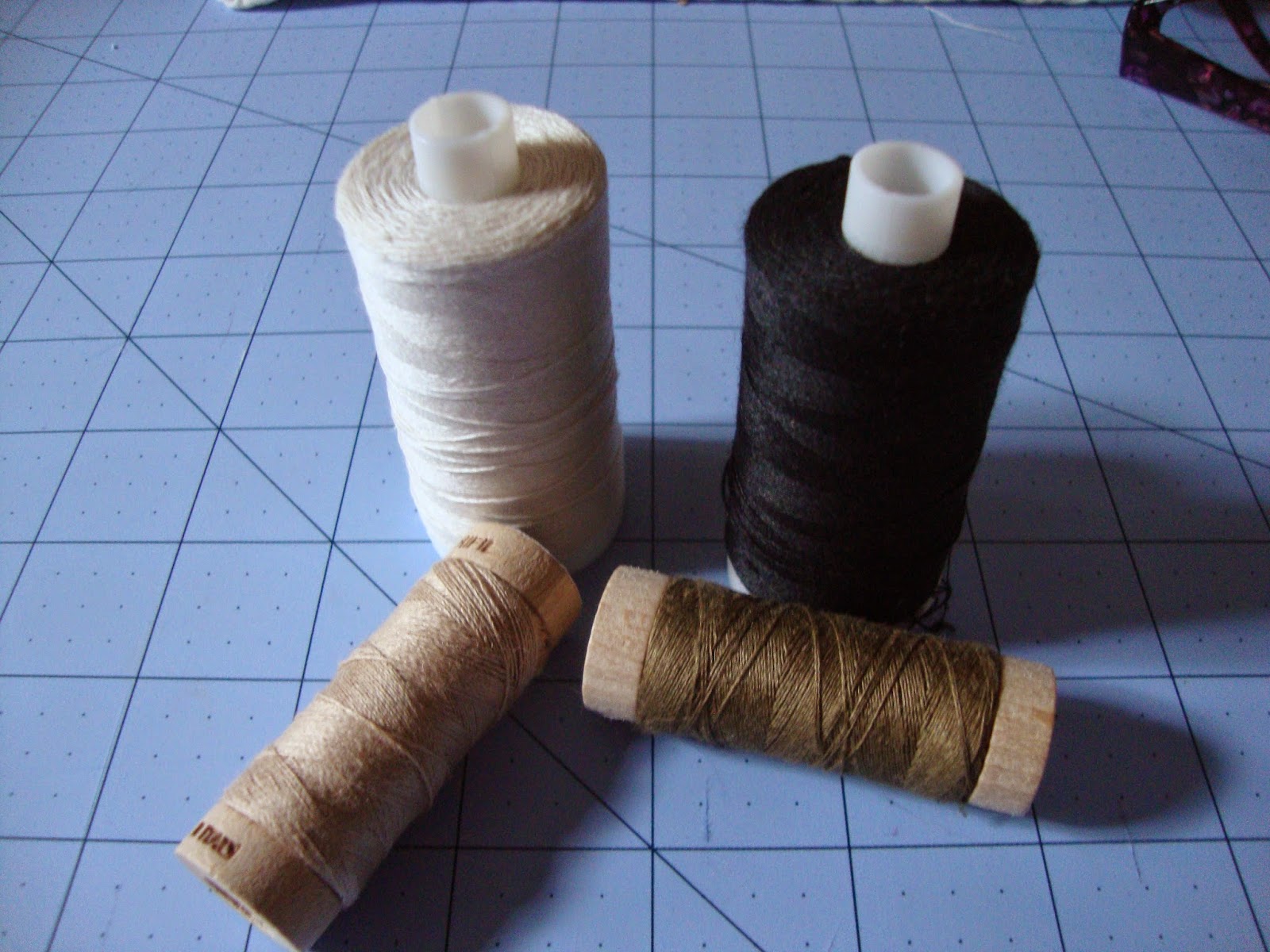 Since the thread was linen based, I was hoping to use linen fabric, but linen is expensive.  I discovered Robert Kaufman's Quilters Linen, and purchased a fat quarter bundle and some yardage from Hancocks of Paducah.  I chose the Yellow Brick Road pattern, because the linen looked masculine and the fabrics would look great with this design.  I got to work making the blocks on my vintage machine, placed them on the design wall, and then sewed the top together during the summer.  I added the borders, and got it ready to quilt.  I tried using the linen thread, but could not get the settings right on my machine.  The thread, although it feels strong, doesn't handle the stress from free-motion quilting.  Alex had already discovered this.  He recommends using it as bobbin work (which I can't do on my machine) or hand sewing.  I tested larger eye needles, denim needles, titanium needles, and topstitch needles.  I tried straight line quilting, as well, but the frustrations became too much.  I switched to Aurifil Mako Cotton 50 wt for the top, and 40wt for the borders.

Here is some info on how to use this great thread.
Teri Lucas and Teri Lucas

I spoke with Alex at Quilters Take Manhattan in September, and he forwarded me the links.  Even though I had tried the needle size recommended, it was still too frustrating for my machine.  It would be wonderful thread for hand stitching, and is being marketed for hand work, hand quilting, or embroidery, rather than machine work, unless, like Teri, you have the bobbin case needed for bobbin work.

So, I finished the quilt with cotton thread, listed it in my Etsy shop, and brought it to the craft shows I did during November and December.  It's a very pretty quilt, and the Quilters Linen looks like men's suits, but is a great cotton, with a little texture to it.  I thought the story would end there. 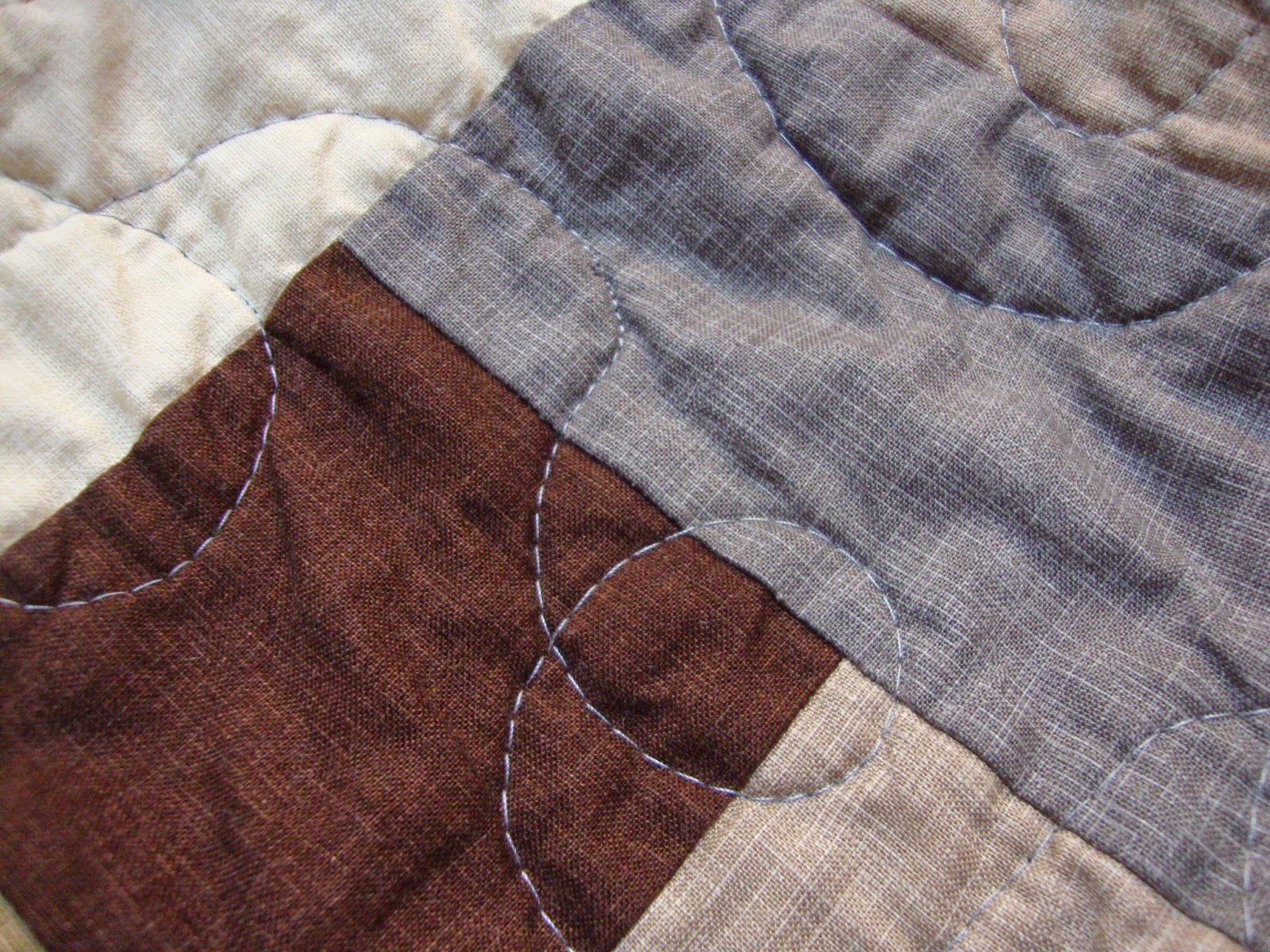 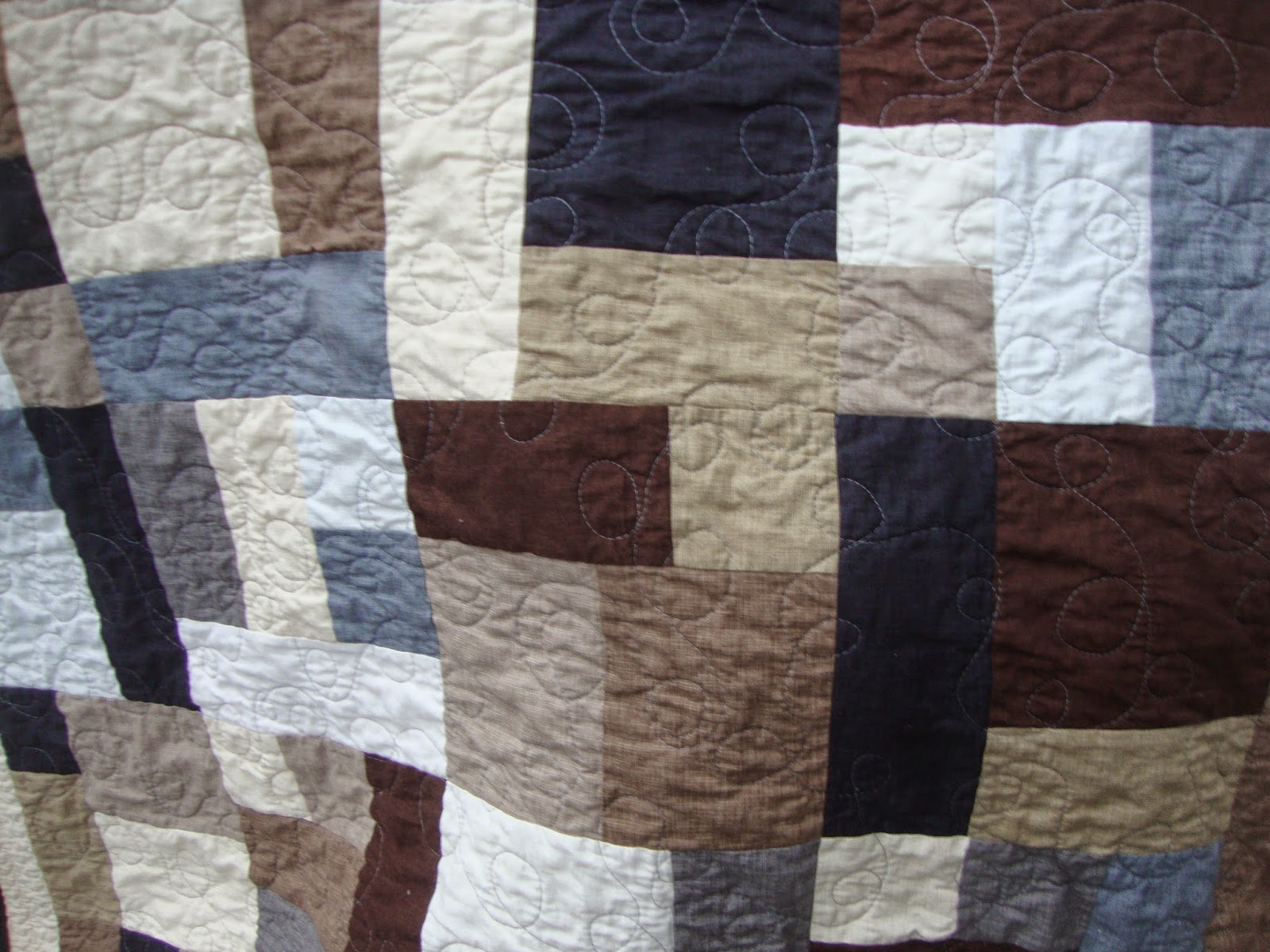 If you've seen me and my quilts in person, you know that I think the best thing about a quilt is how it feels to be wrapped in it.  I'll grab a quilt and toss it over your shoulders, and everyone says "Ahhh" when it happens.  The quilts are warm, but not hot.  They are soft and comfortable, and just make you feel good.

This quilt has an epilogue, too.  I was vending at the Arlington Elementary school's craft show in December, 2014, in Stroudsburg, PA.  A few of the vendors were friends, so we were having fun, and posting it on Facebook.  The vendor with Partylite candles (sorry!  I don't have your name) posted, and her cousins from NJ decided to come to the show.  The wife came over to see my quilts, and inquired about sizes for table runners.  We discussed custom stuff, and then she looked at my quilts.  I pulled one off the rack and threw it over her shoulders.  She said, "It feels like a hug."  Her husband protested another "blanket" for his wife, and said he's always too warm, and she's never warm.  He said, loudly, that he would not purchase it.  I decided (a very bold move for me) to actually throw it over his shoulders, too, and he agreed; it felt good and was not hot, but comfortable.  Their son said it felt like a hug, too.  I thought it was unusual for a teen to admit that.  She pulled a few more off the rack, to look at the colors, and kept petting the Quilters Linen quilt.  She said she loved it.  Her husband looked at it, too, and she looked at him and said, "Do you think they will allow me to have this in the hospital?".  I said it should be allowed since it's 100% cotton.  She explained that she was scheduled for surgery right after Christmas, and would have a 6 month recovery time.  He said something about the cost, and walked away.  She petted it a few more times, and I reminded her that she could also buy it online, if she still wanted it later.  I gave her my card.  They went into the other vendor area, and I spoke to other customers.

All of a sudden, the husband, a big guy, over 6" tall, and built like a linebacker, runs around the corner, almost knocking over Sharone's table, and tosses his credit card at me.  He says it's a surprise for her, and to hide it.  I process the transaction, and the Partylite vendor takes the quilt and hides it for her cousin.  One of the other vendors goes to keep his wife distracted while all this goes on.  A little later, the son comes to hide the quilt in their car (Dad said "under the seats as much as possible").  I provided a bag for it.  We covered the spot on the rack, in case she came back to my quilts.

After the couple left, the Partylite vendor explained that her cousin was making a lot of noise about the quilt to the wife.  He was convincing her not to buy it.  He claimed that it was too expensive, and she didn't need it.  He was being rather abrupt and a little mean.  That was before he gave me his credit card.   That was all for show, to keep her from buying it.  The other vendors in our row were very impressed with him, after they saw he wanted to surprise her.  He wanted her to have it, knowing it would give her comfort and love during her surgery and recuperation.  I was told she had a leaking valve in her heart, and should be in the hospital already, but was holding off because she wanted to celebrate Christmas with her family.  At this time, I'm hoping she's had the surgery and is doing well, getting comfort from a quilt made with love and purchased in love, and that she feels the hugs that are built into each one of my quilts. 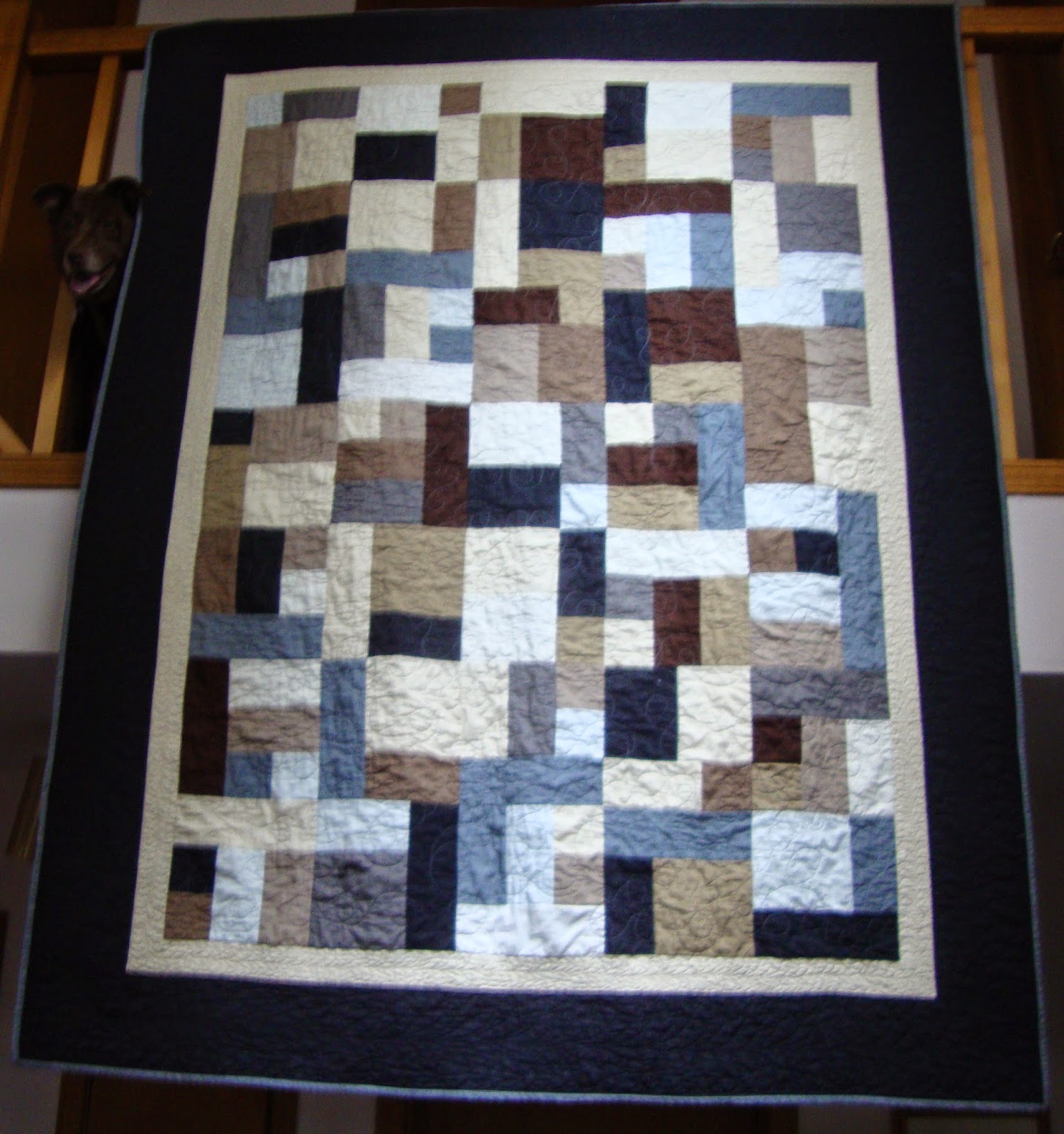 I love knowing the stories behind my quilts, and the epilogues are the best parts.  If you need a hug, I hope you consider buying a quilt from one of the members of Quiltsy Team on Etsy.  I'm sure you'll find one that you will enjoy.  We all make sure there is love built into our quilts.

Thanks for visiting.
Maryellen
Posted by teachpany at 10:50 PM

Well, I just read that story aloud to my husband and barely was able to finish reading it aloud because I started choking up! What a wonderful story, thank you for sharing it. I love the colors you used on that quilt too, and so does my husband, we may end up with something similar in the future. :)
~Brandy

One of the best quilt stories I have ever heard! Isn't it great when the work of our hands can give such joy and comfort to others?