Hi!  Thanks for stopping by.  I have something finished.  This was started for the June 2016 Island Batik Modern Batik challenge.  I set the blocks aside, until I could really decide on the layout.  I only had 9 blocks, so couldn't do one I was hoping for, so decided to just do the 7's layout, with all blocks going the same direction.

Have you done a log cabin block?  My first quilt, back in the late 1980's was a Quilt In A Day Log Cabin, and. the quilt really was done in a day, because we tied it.  I don't know where that quilt ended up (my ex took it), but I do actually have 1 block (my oldest orphan block?)  I do love Log Cabins, and have used my original book to make other quilts.  I also picked up the Quilt In A Day Twisted Log Cabin pattern and the Wonky Ruler a few years ago, and really wanted to try them.  When June's #IslandBatik challenge was Modern Batik, I decided to make the traditional look new, using pinks, creams, and grey.  Then it sat!

In January 2017, I decided to participate in the APQ 2017 UFO challenge, and this is the quilt on my list for February.  So, it's now a finish!  Yes, finished on Day 5 of the month!  I'm pretty excited about that.  (But I'm procrastinating something else, so finishing this may sound like I'm organized, but it's only a mirage, lol).  #APQResolution 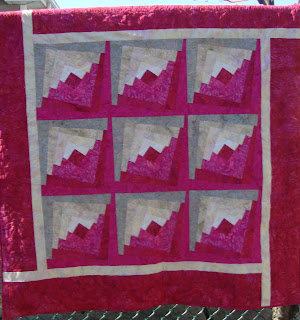 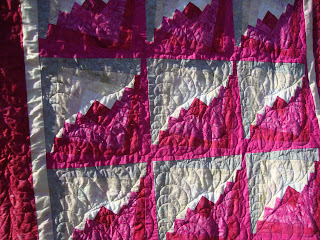 It didn't take long to sew the 9 blocks together, then add the borders.  I liked the way the cream piece was added, so decided to use the pattern's border design, although I did cut my pieces wider than directed.  It required partial seaming, but that's actually easy, and the directions were perfect. 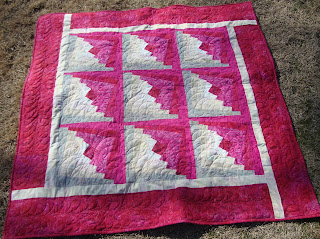 I quilted the light/grey section with a feathery design, and used Aurifil 50wt Mako in 2600, Dove, and the pink and border sections in Aurifil 50wt Mako 1100, Red Plum.  I left the cream border unquilted.  I wanted this to be soft and cuddly, and used a wonderfully soft Ultra Cuddle fabric from JoAnn's on the back.  I'm going to list this as a baby/lap size quilt, because it's really wonderfully soft.  I don't like to do too much quilting when using minkee style fabrics on the back, because it detracts from the softness and can cause stretching. 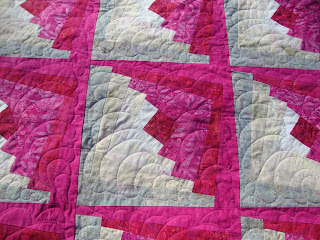 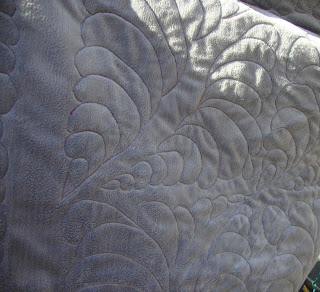 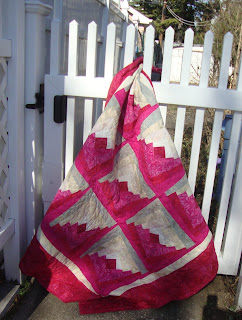 I'm calling this Finish #4 because the quilt for the Tennessee fire victims was finished by Lily at The Batty Quilter.  The rest of the Quiltsy Team donation quilts will be arriving to Jennifer's house soon, so they can be given to the victims in Gatlinsburg.  I'll share the blog post about that when it happens.  Watch my Facebook wall!

I'm procrastinating doing some more organization in my sewing studio, and I'm waiting for the first box for 2017 from @IslandBatik.  I was chosen again as an Ambassador, and Katie has shared photos in the Ambassador Facebook page to tell us our boxes are coming soon.  I'm thrilled to be an Ambassador again.  The fabrics in this quilt were from Island Batik.  The quality and colors are always wonderful.  And this quilt uses fabrics from previous boxes (as well as some I purchased).  I don't want to start another project yet, because I know I'll want to make something with fabric from the new box.  So, finishing something I had already started makes sense, right??

Thanks for visiting.
Posted by teachpany at 5:07 PM

Beautiful fabrics, design and free-motion quilting. Total #CreativeGoodness. And, I look forward to seeing what you create in 2017 as an Island Batik Ambassador. I'm sure it will all be beautiful.

Saw this on FB first...loved it there too. Great statement quilt with a modern take on traditional design!