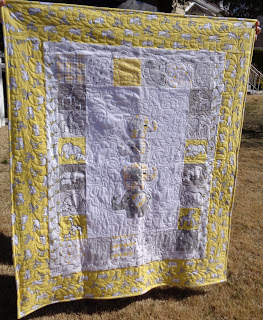 My friend's daughter, Megan, is expecting her first little one.  She and Joe got married last April, and I made the Triple Irish Chain quilt for their wedding gift.  I knew I had to make something special for the "little peanut", which is their nickname for the baby.  They're not revealing the baby's gender or name until birth, later in April, so that's exciting!  Megan mentioned she wanted yellow and gray, with elephants.  Although I wanted to use Island Batik, I felt this quilt would be better in a print.  I found Little Safari, which included elephants and other cute animals in yellow and gray, at Fat Quarter Shop.  They had a Fat Quarter bundle which included the panel, and I ordered yardage for the border and binding.  I love how quickly they ship!

When using flannel, I prefer to prewash.  Flannel shrinks and frays.  A lot.  I lost 3/4" inch from each FQ, plus fraying, and almost 2" from the total of the 2yd border piece.  The ball of frayed thread was larger than a tennis ball.  But the fabric came out nice and soft. 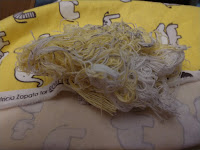 I looked on Pinterest for a few elephant themed quilts, and knew fellow Island Batik Ambassador Jessica of Desert Bloom Quilting had a design, as well.  I decided to use her's for my inspiration.  I played on EQ8 to change the borders to suit the panel squares, which after washing yielded 5 1/4" squares.  If I made it 5", I would have lost some of the giraffe heads, and tails of some of the others. 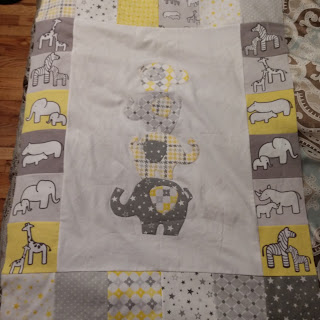 I cut an oversized piece of white flannel for the applique background, centered the applique pieces, using a fusible web, and ironed them down.  I used 2605 Grey, 2615 Aluminum and 5001 Ocher Yellow Aurifil 50wt threads to machine stitch them, and then used Aurifil embroidery floss, 3 strands, in black, to create the eyes, instead of using Jessica's suggested dots.   I quilted around the elephants with 2021 Natural White, and added a paisley feather design in the background.  I used 5001 again for the yellow border feathers. 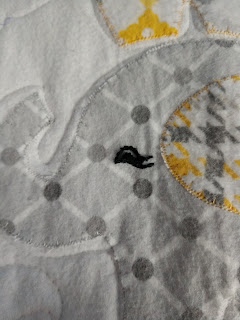 After sewing the side squares for the first border, I measured them, so I could cut the background to size.  I did the same with the top and bottom squares, then added them to the background.  I then added different strips from 2 of the FQs to do the next borders, and added a nice border from the yellow yardage. 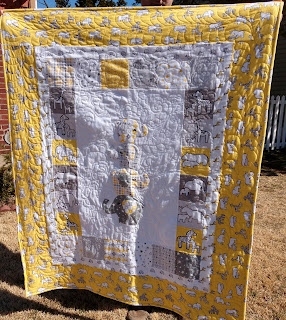 I used Warm & White for batting, and a soft Minkee backing. 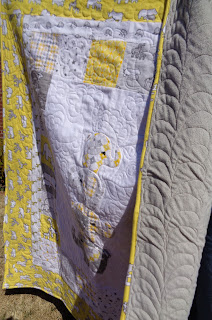 The quilt ended up about 47 by 57".  Christine planned a lovely shower on Sunday, and we had a really nice time.  The food at Rachel's Waterfront in Freeport was good, the cake was delicious, and I won 2 of the games.  They loved the quilt, which makes me really happy.  I can't wait to meet the little peanut!  I do hope they have photos taken with the baby on the quilt, wearing the crocheted diaper cover and hat that Christine's sister, Katie made.  It's an elephant! 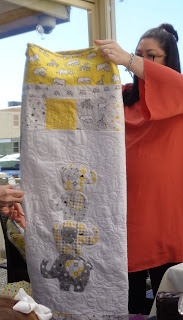 I offered to bring some balloons, and had fun choosing the elephant. 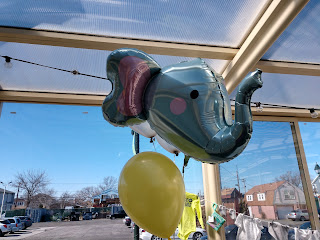 So, welcome, little peanut!  I can't wait to meet you.
Posted by teachpany at 1:14 AM

So fun to make a quilt for someone special. It's a lovely quilt. And so interesting about the extent that the flannel shrunk. Makes it difficult to buy the correct amount to start with, lol!