Hi.
There's some finished stuff here, and info about my last blog post's winner.
Comment 44 was chosen by Random.org, and I've contacted PK for her mailing info.  Thanks so much for hopping along on the Pick a Pumpkin hop.

I've also done a few other projects recently.  I made another Hogwarts robe for a custom order, but forgot to get photos before.  I do know the wearer enjoyed it.

Next, the baskets.  After my father passed away, May of 2016, my brother John and I wanted to do something in his memory at his church.  Dad was a fixture at Mass.  He went daily, was an Extraordinary Minister, Usher, counted the collections, did minor repairs, was involved in the Knights of Columbus, St. Vincent de Paul Society, took videos of special masses, and so much more.  Even the children knew him, and if they saw him, would ask him to bless their new rosaries.  Dad would send them on to the priest, and smile for days.  He was there over 60 years.  Last year, when Fr. Rudy was celebrating his anniversary, I made a new robe for him, in Dad's name, but it wasn't for the parish, it was a gift for Dad's friend.

I've been friends with some of the other ushers, and when they needed help, I offered.  I had watched Dad since I can remember, so it was fairly easy to figure out how to handle the baskets, and did it weekly for more than a year.  Another man asked, so now I'm the sub.  Along the way, I noticed some of the baskets were crumbling.  The rattan wrap on the handles was worn and breaking, and some of the edges of the baskets were damaged.  I discussed it with John, and we decided to replace the baskets in Dad's memory.  It's fitting, since that was how most knew him.  When I spoke to Sr. Judy, she made arrangements to order the new baskets, and suggested I embroider something to state they were in memory of Dad.  I had just purchased an embroidery machine, so designed a simple patch, and stitched it out.  Since the liners were removable, I was able to easily stitch the patches in.

I've been honored to carry Dad's baskets a few times, and seeing the patch brings back wonderful thoughts of him.  The other ushers knew him well, and they're also happy to think of him. 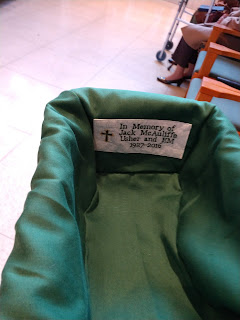 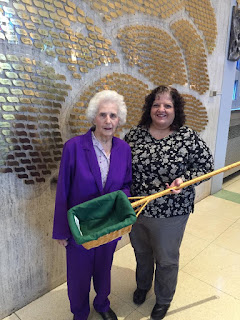 Mom and I with one of th 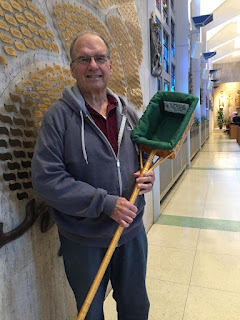 John, who also served as a substitute usher, was here when they were first put into service, as well.

I also finished the January Island Batik Blog Hop top, featuring City Culture.  Click the link for the memory, lol  I  had the quilt pin basted for a while, and finally had a few days to quilt it.  I had other projects I needed to work on, but couldn't grab them when I had time to sew. Long story, not needed here.

I did a swirl/hook design over the top, which uses my Zen Basket pattern, using Aurifil 50wt Mako 2605, Gray, 50wt.  For the inner blue border, I used 4644, Smoke Blue and a vine or branch design, plus 5023 Medium Green in a fern/feather design for the outer border.  I used a grey wide back for the backing, and Warm & Natural batting, and added a green batik binding.  Here's a few shots. 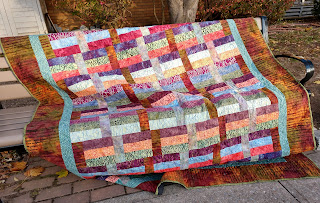 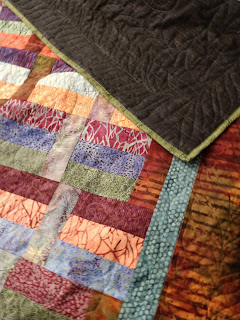 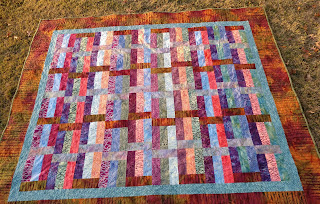 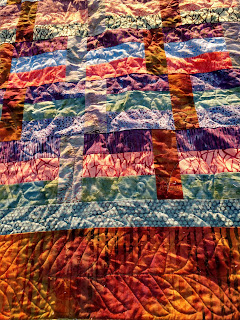 City Culture should be in stores now, and I've gotten tons of compliments on the colors and design for this pattern.  It's really easy to do, using 2 1/2" strips. 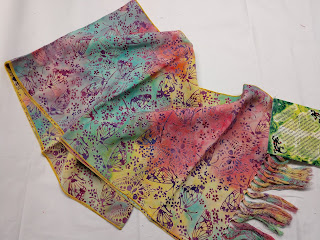 In addition, I've also started selling Island Batik fabrics in my Etsy shop.  I have a few 10" square Stacks and white, Sprinkles and Lavender yardage so far, plus some of the scarves, which I hope to get listed this week.  If you need something, let me know! 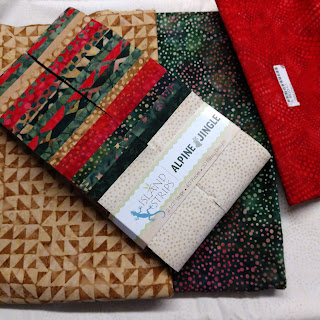 Thanks so much for stopping by to catch up with me.  I am currently working on the November Cozy Cabins challenge, using Alpine Jingle for my Log Cabin quilt.  I have something fun planned for it, using my new embroidery machine.  You'll just have to wait to see what happens.  Here's a little teaser, where I am tonight on the blocks. 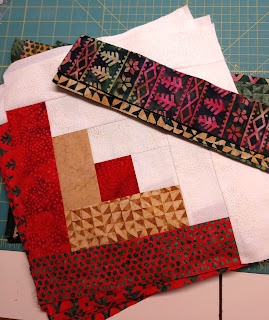 Next strips are cut.  2 logs of greens, then assembling the top.  And then the fun...
Happy Thanksgiving, and thanks for visiting.

Posted by teachpany at 1:28 AM

The baskets are a wonderful tribute to your father and his service! They look wonderful. Can't wait to see your log cabin quilt finished, I'm sure it will be awesome! Happy Thanksgiving to you and your family!

Wonderful tribute with the baskets and liners. And I have to say the combo of the colours and your Zen basket design are super effective. Beautiful, looking forward to your log cabin challenge :)