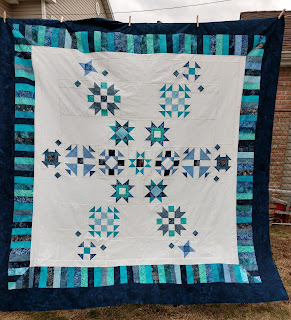 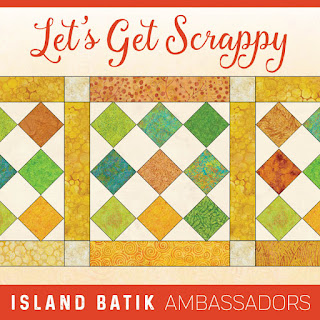 The 2020 Island Batik Ambassadors have been asked to go Scrappy for January.  I don't often consider myself a scrappy quilter, but when using collections like Island Batik's Stacks 10" or Strips, 2 1/2" strips, you get an assortment that makes your quilts look scrappy.  In this case, I had purchased a Fat Quarter bundle of blues for the Quilter's Planner Block of the Month for 2019, from Hancocks of Paducah.  I actually picked up a second bundle, because I wasn't sure I would have enough variety.  After finishing the top in December, before the borders, I decided I wanted it larger, and had enough sections remaining (after cutting out squares needed for the blocks) to cut them into 2 1/2" strips, and make a Piano Key border.  So, I got out my Accuquilt GO! cutter and 2 1/2" strip die, and cut a ton of strips.  I didn't actually count, but figured I could use anything left in something else. 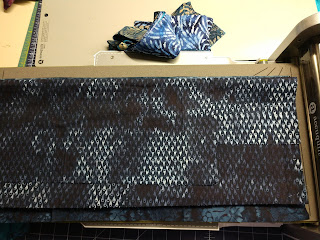 Some of the strips were about 22" long and others were shorter (where I had used pieces).  I just placed them all, and ran them through the cutter.

I decided to sew these in sets of 2, and tried to match up the pieces to get the best use out of the size of the strip, and made sure the section I was using was still 2 1/2" wide.  Oops, I forgot to check this strip set, and discovered I had added a "short" piece when I cut, and didn't check before sewing them.  LOL  Of course I used Aurifil 50wt thread, so it was easy to fix.  I always use Schmetz needles, the one here is a Microtex size 12. 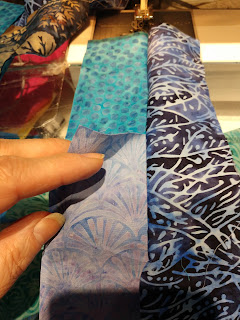 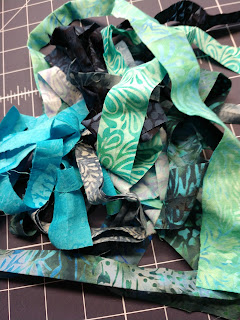 Any of the skinny parts will be used later to make another clothesline basket.  Just wrap them around the cotton cording, and zigzag.  Here's one I made before. 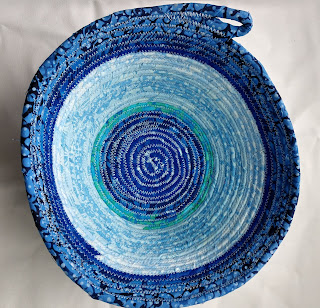 I sewed the 6 1/2" sections together to make the border, and got them attached to the sides.  I wanted to do the mitered corner, but didn't have any "single" pieces left.  I looked through my "binding leftovers" for more blue strips, pressed them open and cut them into 6 1/2" strips.  I needed 8 units that had 3 sections.  I found a piece of my all time favorite Island Batik collection, Sea Salt Sandy in blue!  I added it to the blocks for the corners.  Yay!  It was fun to even use these, and remember all the projects. 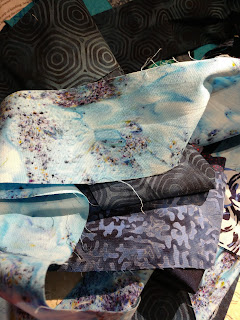 For the corners, you need 2 3 strip units, and press them so the seams nest.  This info was originally part of the Quilt in a Day book I had used for Jewelbox.  Place them with the strips going the same direction, draw a diagonal line from corner to corner.  Decide which side you prefer, by folding it back on the diagonal, and looking at the matches, and which side you wanted to use most.  In my case, I really wanted the larger section of Sea Salt to show.  Draw a second line to the other side of the center, 1/2" away from the part you like best.  Stitch on both lines, and cut between (so you'll have one unit that's 6 1/2" square, and the other that's about 5 1/2" square).
Press this center seam open.  Add the squares to the border sections, paying attention to the direction of the strips and units.  The long side needs to be next to the border, with the smallest corner to the outside.  Attach the border to the top and bottom of the quilt.  If you want to leave it like this, just stitch again, less than 1/4" from the edge, to make sure the seams don't pop (staystitching, closer to the edge).  I opted to add in another 6" in the Navy mottled Basic from Island Batik.  I thought it added a nice frame.  This now measures about 94", a nice size for a queen bed. 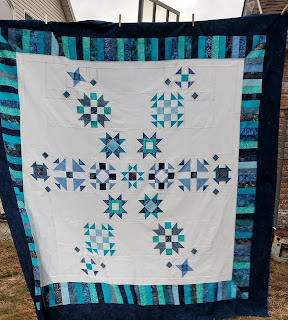 Remember those 5 1/2" squares?? Make a mug rug!  Just point the short sections to the center, and repress the seams so they nest, press the 4 patch seams open.  And I had a few left-over 2 strip units, so I cut more from the binding strips and added a 3rd.  These were set into a Rail Fence block and will be a table runner.  I may end up making 3 more units to make this longer (there's still one extra unit), and plan to do something for a border.  I'm not sure what I plan to do with the 4 patch units in the bottom left corner yet.  They may become more mug rugs.  Or maybe a place mat set, with something in the center.  I'm using them for leader/enders to sew other things, too.  And the blue scrap pile is much smaller. 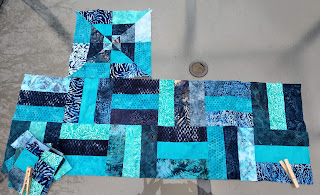 I'm going to be getting this quilt on Vanna, my long arm, soon.  It's been a crazy few weeks.  My brother and sister-in-law were visiting, and we were busy with cleaning Mom's stuff so I could move upstairs.  We have to do lots of clearing from her hoarded stuff, and then do some repairs and get rid of 40 year old carpet.  Her closet was stuffed, and the sliding doors were damaged, and the rod and shelf were so badly warped that it needed to be repaired.  My friend and handyman, Charley, replaced the damaged stuff with a beautiful custom organizer, and new bi-fold doors.  I wish I had a photo of the "before", but I didn't think to get one of Mom's mess.  Alzheimer's causes many issues, hoarding and disorganization among them.  Here's the improved closet.  The flooring is hardwood, under the ancient carpet, so I'll have that sanded and finished, and get an area rug.  I still need to finish clearing the dressers, and go through the boxes and bins under her bed.  I'm storing her summer clothes, since she doesn't have storage at the nursing home.  It's such a challenge to keep clearing her stuff, but I have to.  We made lots of little steps over the last 2 weeks, with lots donated, lots in the trash, and lots of laughs.  I'm hoping to be able to move up in a few weeks.  I still need to update a little in the bathroom, and clean out the back room, which will be Vanna's soon.  Then I'll tackle the hall coat closet, and the basement.  Little steps, but the right direction. 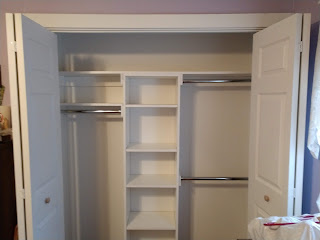 I'm also linking up with Elm Street Quilts One Monthly Goal.
My first project was the Hockey quilt (which my cousin was SO excited to receive last Friday, and is going to be collecting signatures for years) and the Scrappy project was a second.  I did want to get the Crystal Ball fabrics cut into something, but didn't get inspiration for that yet. 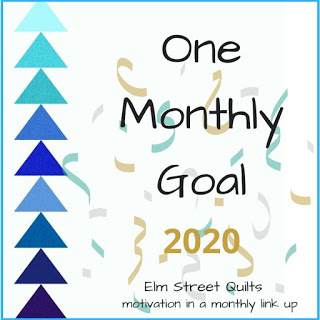 Thanks for visiting!  Have you found ways to use your scraps?

Posted by teachpany at 2:07 AM

You certainly have your work cut out for you!!! I'll be doing the clean-out when my dad passes...2,100 square feet plus a 3-car garage!! Not looking forward to that!!! I won't be fixing it up to live in, but to sell. I'm glad you had help for that difficult job.

I love the blue and white quilt. You do have a lot to do, but I am sure it feels good to be able to tackle some of it. Glad you succeeded with your OMG! I did to and need to post....tomorrow!

Thanks for linking up with Elm Street Quilts One Monthly Goal and congrats on your finish.