Spread Love and Joy with Accuquilt and Island Batik

This month the Island Batik Ambassadors were asked to Spread Love and Joy with a quilt, using the Accuquilt GO! BOB (block on board) die that we received in our January Ambassador boxes, and use the 8" Qube dies that came with the system to make a quilt that will help spread love and joy to someone.  I'm not sure who is going to receive this quilt yet, but it's one I loved making. 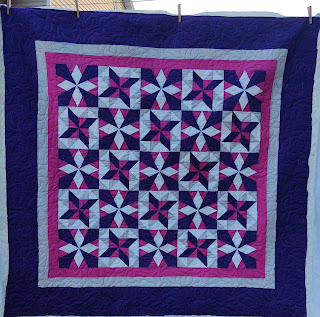 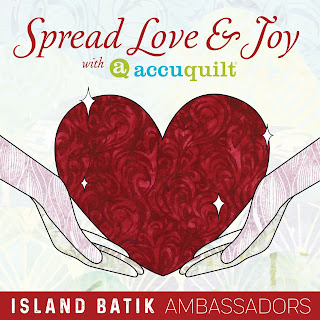 My die was Hattie's Choice, which makes an 8" block, so it was easy to make another block that would also finish at 8" with the Qube. 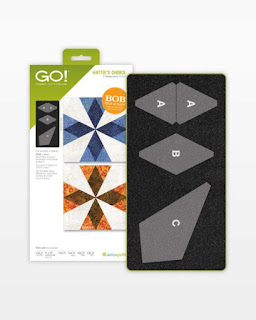 I played with a few options in EQ8, but first needed to find the block, since a search for Hattie's Choice didn't turn up anything.  Since a block may have many names, I used the Encyclopedia of Quilt Blocks by Barbara Brackman to find one similar.  It's a variation on the Maltese Cross or Spider Web style, so I looked in that category in EQ8 to find a block that's close.   The die doesn't have pieced corners, which I discovered after making the plan.  I tested the block and realized my design would need updating, so I changed it again, and again, and up to 8 agains, lol.  My first choice was to use red, white and blue fabrics, but the solids ganged up on the mottled fabrics and stood firm that they needed to be used in this quilt.  I think it makes the traditional Hattie's Choice block and the Star Puzzle block, aka Barbara Fritchie Star look more modern, and I liked the secondary pattern that developed.
This was quickly cut, although a few purple and white HST units jumped ship and I needed to make more.  I found one today, lol.  Anyway, using Aurifil 50wt thread and a Schmetz Microtex needle made it fast to sew.  In short order I had 13 Hattie's Choice blocks and then had 192 (then 196) HSTs ready for the star blocks.
The next challenge popped up when I was sewing the blocks together.  During the planning phase, it did not seem that the seams would match, where the HSTs met the Hattie's seams.  But they did in reality.  I guess the angles used in the die are different than the ones on EQ8's version, but that's fine.  I decided to press the seams open, and didn't worry too much if things were not perfect.  It's a quilt that will get used, hopefully, so I'm not as concerned with matching points, more about secure seams and comfortable fabrics in pretty colors.
I used a grey swirl wide back, and Hobb's Silk Blend batting.  I've been dying to try it since it's included in the Ambassador boxes, but most of my quilts are too large for the 60" Throw size.  I tried to keep the quilt below 60", but lost that battle, too, lol.  I was happy to see that the batting is a generous 62", which was just enough.  I'm thrilled with the panto, Maggie's Rose Grand from Urban Elementz, and Aurifil Forty-3 thread in 4660, Pink Taffy for quilting.  My Handi-Quilter Amara and Prostitcher had it finished quickly, so I could snap a few photos before dark.  I'll add more photos when it's bound, hopefully Thursday. 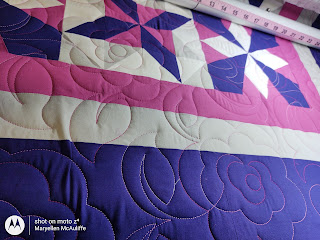 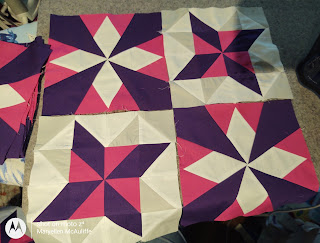 Quick layout of blocks, and that's when I realized the seams do match, or should.
And more out takes, if you will.  It was pretty windy when I grabbed the top for photos before quilting. 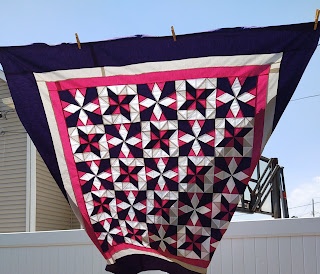 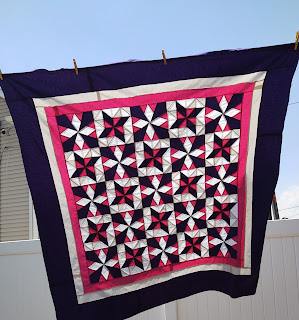 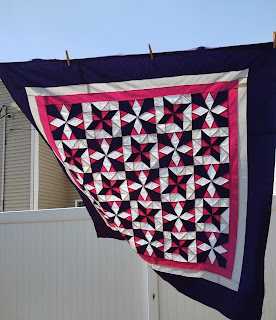 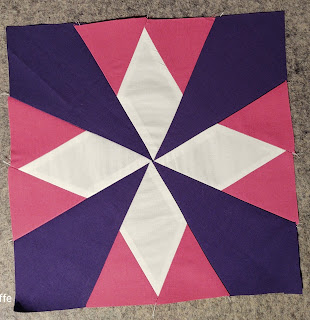 Thanks so much for stopping by.  I've had a few finishes this month, but will share more about them, soon.
Maryellen

For the love of geese said...

Pretty and I love the quilting.

Love it!
I also love that you aren't striving for perfection ... but once this quilt is bound and washed - you won't find any imperfections! :-)

It looks great, Maryellen! The blocks pair so nicely together. And I love windy quilt top photos. They make the quilt look "alive". Have a fabulous day!