Back in November, 2021, Island Batik asked the Ambassadors to use a specific collection to make a Storm at Sea quilt.  My collection was the stunning Petals Provence, shades of yellow from pale to cornmeal, and blues from light sky to deep navy.  The prints are gorgeous, and you may still be able to find some of the fabrics or precuts in shops. 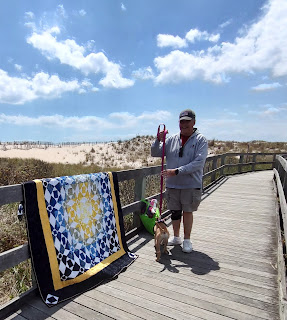 At the time, I was unable to finish my quilt because I was having health issues.  Earlier this month, my brother John and his wife, one of my bffs, visited from Colorado, and we took a sight-seeing and quilt photo day to Fire Island and Robert Moses State Park.  They have a great boardwalk from the parking lot to the lighthouse.  Arlene made it to the lighthouse, but with the 3 quilts I was carrying, and John's limited walking ability, and Heather's little puppy legs, we went almost all the way, but I was able to get the photos I wanted. 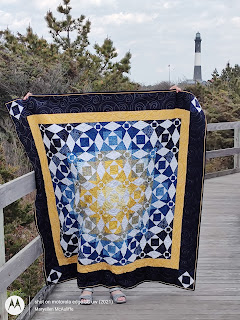 The issues are not completely resolved, but I did want to document the finished quilt and give a little info about my issues.
I had mentioned I needed a cornea transplant, and it was scheduled for September, 2021.  The procedure was done as an outpatient at the hospital, instead of the eye surgery center, and was not a good experience.  I did what I was supposed to, laid on my back for 2 days (except for bathroom and eating) and the graft failed.  My eye never cleared.  Another in-office procedure a week later was tried to remedy that, and another 24 hours of laying on my back, and it didn't work.  I've been unable to see out of my left eye since then.
At the same time I was having spotting issues, and then had a full period.  I thought I was in menopause for the last 3 years, and was surprised.  I contacted my Dr, who referred me to a gynecologist, and was given an appointment the next day.  A suction biopsy was recommended, and done at that appointment, and the diagnosis came back positive for Endometrial Cancer.  After an internal sonogram confirmed it, I was scheduled for a complete hysterectomy via the DaVinci robot, which happened in December.  Although the robot made the surgery easier, it was still a major issue and took a while to recover.  After that, based on the results of the tests, it was recommended I also undergo brachytherapy radiation, to make sure that any cells that flaked off would not be able to develop cancer in the vaginal wall.  I was lucky that it was only stage 1, and only a little through the endometrial wall into the uterus.  I had 3 brachytherapy treatments that finished in March.  I'm still recovering from that, but getting stronger every day.
Here's my warning to others.  Pap tests do NOT detect endometrial cancer.  There's no specific test that does.  It's fairly common in larger women who have had few or no pregnancies.  So, please contact your Dr. if you have unusual bleeding or spotting after menopause, or just don't feel right.  I had been tired and couldn't explain it, for most of last year.  My body didn't seem to be working right, and I wasn't sleeping well.  Stress was building about my eye issues, and those are all symptoms that I should have had checked.  Luckily, I questioned the spotting and got treatment early.  It had not spread to my ovaries, fallopian tubes, or cervix.  I was lucky.  The recurrence rate is about 4% after the brachytherapy.
The quilt was named After the Storm because of the storm of heath issues.  I wanted it to represent the sun and clear blue skies after the storms.  I was happy to finally have a chance to get the lighthouse photos and share my story.  The issues caused by the storm of medical challenges are not over, but I can see the light. 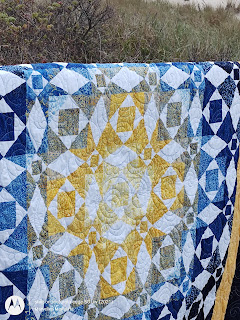 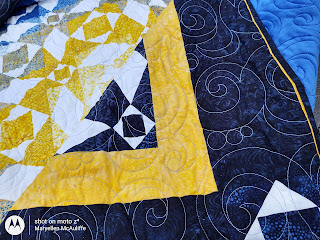 Panto is Whitney's Pearls by My Creative Stiches.  I used light blue Aurifil 40-3 for quilting. 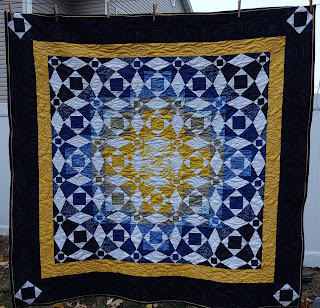 The quilt was actually finished by December 6, 2021, but I waited to tell my story, and hopefully help another woman with my experience.
Details:  About 72" square, using the Accuquilt GO! BOB Storm at Sea, and EQ8 for the inspiration for the layout.  I used a royal blue Minkee backing, and Hobb's Heirloom bleached cotton batting.  I used a Faux Piped binding for the edge, and added square in a square blocks for the corners.
2 other quilts that were ready for photos that day include the December 2020 challenge, Medallion Quilt.  I chose the Radiant Star pattern book by Eleanor Burns and Quilt in a Day.  I had made good progress on the top and getting it quilted, but got stalled when I needed to take it off the Long Arm frame to turn it to do the side borders.  I put other quilts on the frame and got tons done during 2021, but this became a UFO.  It's now done!
Details:  Strip Collection is Sweet Hearts, and the border is a Basics, I think Tourmaline.  I used a floral wide back for the backing and Hobb's Heirloom cotton batting.  I always use Aurifil thread for piecing and quilting, and Schmetz needles for piecing.  I did lots of custom quilting on this.  Prostitcher for the borders and smaller star blocks, ruler work for stitch-in-the ditch and some of the designs, and free motion curls in the larger star.  It also measures about 72" square. 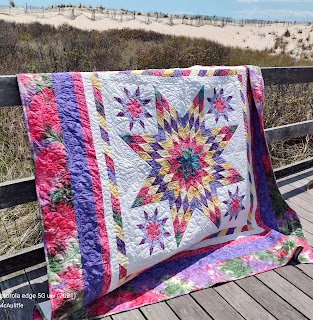 The third finish, or almost finish, was the Sew by Row top using Sew Fine for Missouri Star.  I lead a focus group on Zoom for my quilt guild over the last few months, and got this done to share at show and tell earlier in May.  I still need to add the button accents, but it's bound and has a label.  Buttons are used for the joint in the scissors, as pin heads, and buttons on the sewing machine head, as well as the knot on the fat quarter bundles.  I'll machine sew them on soon. 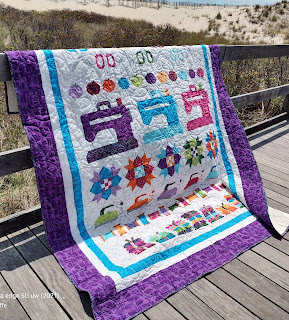 I changed the borders, so it finished about 78 by 90".  I used the Sewing Time panto from Urban Elementz. 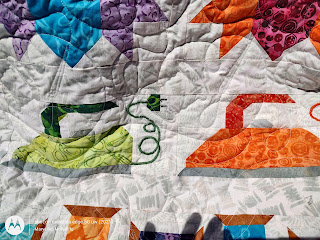 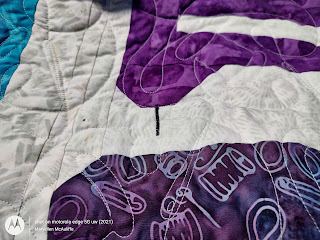 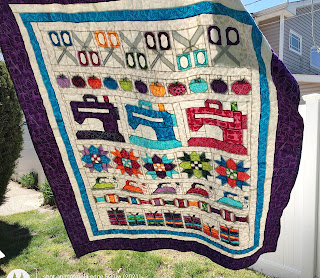 I've also finished some customer quilts, too.  It's been a busy few months, but I think this catches me up on my blog details.
Thanks for reading this far, for joining me on this journey, and for hopefully taking my warning about getting medical treatments when you notice something wrong in your body.  Don't shrug it off, and don't let your doctor shrug it off.  Push for the tests and answers, and then find the best team of oncologists for treatment, if needed.  But I hope you don't need an oncologist.
Maryellen
Posted by teachpany at 2:00 AM

Your work is fabulous! After the Storm is my fave, but all 3 are Wow-worthy. Thank you for sharing your health experiences, and I hope you have 'clear skies' from here on.

Fabulous post ME! Your story will be welcomed by many. LOVE THE PICS!

I love your quilt. But the reason I am writing is that I am so thankful to you for sharing your story. Someone I loved very much had the symptoms of endometrial cancer but did not pay attention to them, and she died. I am not blaming her--her life was filled with stress and work and she put everyone ahead of herself and her needs, and I think eventually she was afraid, when it was clear things were serious. By the time she could not ignore it, it had spread too far. I am so glad you acted quickly. I also think your message about finding an oncologist when you have questions is excellent advice. Fifteen years ago I had an ovarian mass that we were "monitoring", thinking it was likely benign, which suddenly grew quickly. I immediately opted for a gyn/oncologist. I wanted to be under the care of someone who had seen catastrophic situations, not someone who was used to having things go smoothly and wouldn't recognize trouble or notice when something was slightly "off". I'm very thankful that I was fine, but if I hadn't been, my doctor would have known. Also, he was very sensitive to my worries--I think more than someone who was used to handing out good news on a daily basis might have been. I appreciated his moral support in the time between identifying the quickly growing mass and the date of of surgery to remove it and biopsy it. Sorry to talk so much about my experience! Your post stresses the most important things I learned: pay attention, follow-up, see an oncologist. And here's another: Share your story so other women can learn from it. Gone are the days when we didn't talk about gynecological issues. Hooray for you, Mary Mack!