My nephew and his beautiful wife are expecting their first baby.  Teri is also a quilter, so I hoped she would appreciate a quilt from Baby Mack's Great Aunt.  They are waiting until the birth to discover the baby's sex.  I'm secretly hoping for a girl, but I'm also happy it may be a boy, another McAuliffe, to keep our family name going into the next generation.  So, when the invitation for the shower came, I wanted to make a quilt that could be used for either gender.  I had won a Fat Quarter collection from Benartex, so I picked that, plus the pattern "Hole in the Wall" by Quilt In A Day, to make a bright, fun, quilt.  I picked red solid for the sashing, and needed one more FQ for the blocks.  I picked up the blue and green wave design, the solid and the minkee backing from JoAnn's. 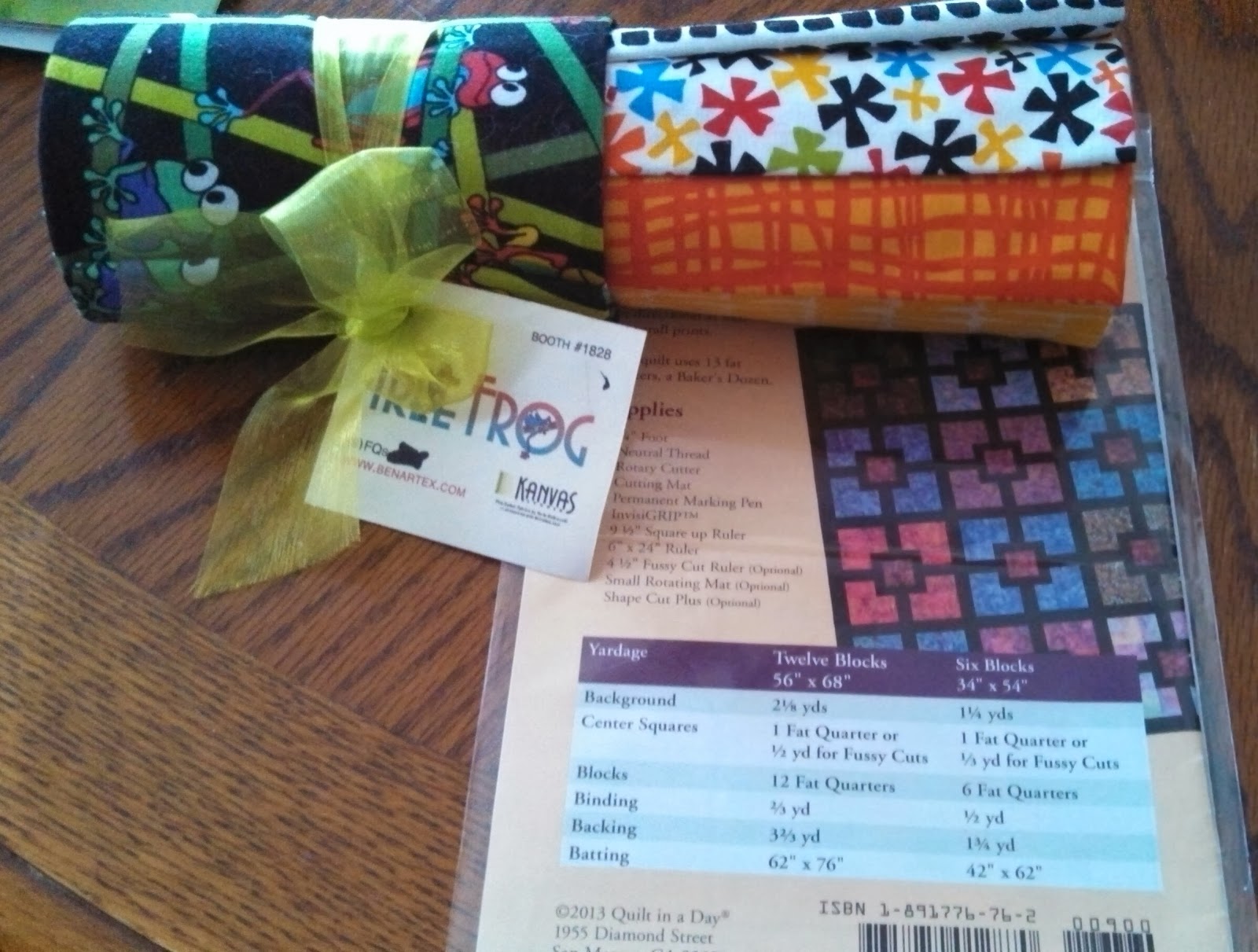 The collection, called Tree Frogs, by Kanvas is really fun.  One print has a variety of sweet and fun tree frogs in different colors.  I fussy cut the frogs to star in the center of each block, and used additional fussy cuts to feature different frogs in the cornerstones.  Two prints featured X and flower shapes on either black or white.  Another was a graphic black on white, and the remaining prints were graphic designs in yellow, green and orange.  I picked the red for sashing, which would pick up the red in the frogs and flower prints, and hopefully be suitable for either a boy or a girl.  It's bright and fun. 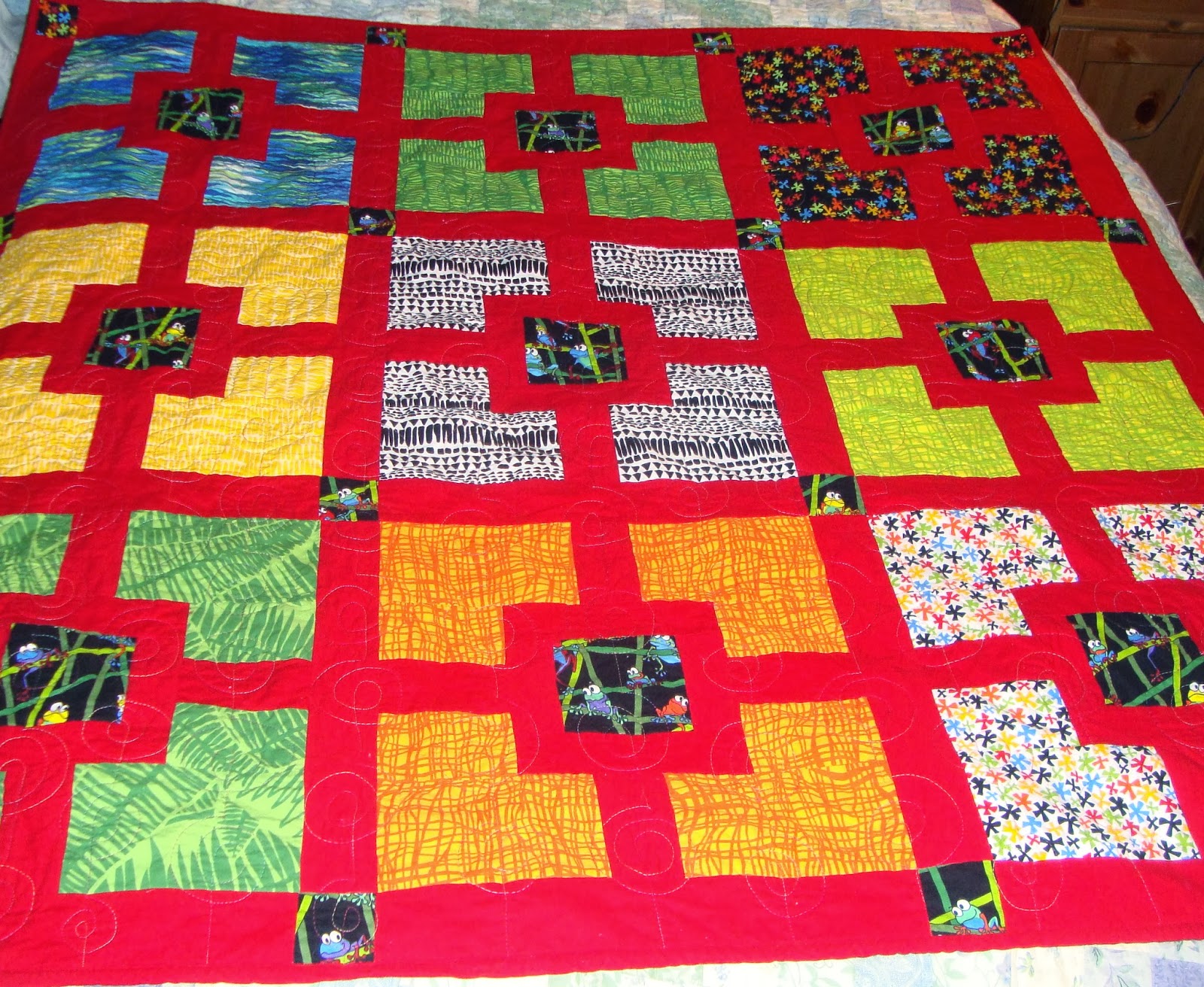 So, how does one quilt a Frog quilt??  Because of the minkee backing (it stretches and also has a nap) I wanted a fairly simple design that would be fun, but not a basic stipple.  What to do??  Wait for inspiration. This came in the blog by Cynthia Brunz designs, a fellow seller on Etsy.  She posted some ideas in this blog post,
http://quiltingismorefunthanhousework.blogspot.com/2014/01/scrap-palooza-quilt-1-part-three.html
and I saw the Line of Swirls pattern, and thought they could maybe pass for lily pads.  So, I used a great variegated Aurifil thread, 3817, in 50wt Mako Cotton for the top, and used 2250, the perfect red, in the bobbin.  Have I mentioned I love Aurifil?  No issues with the quilting.  Warm & White cotton batting was used, too. 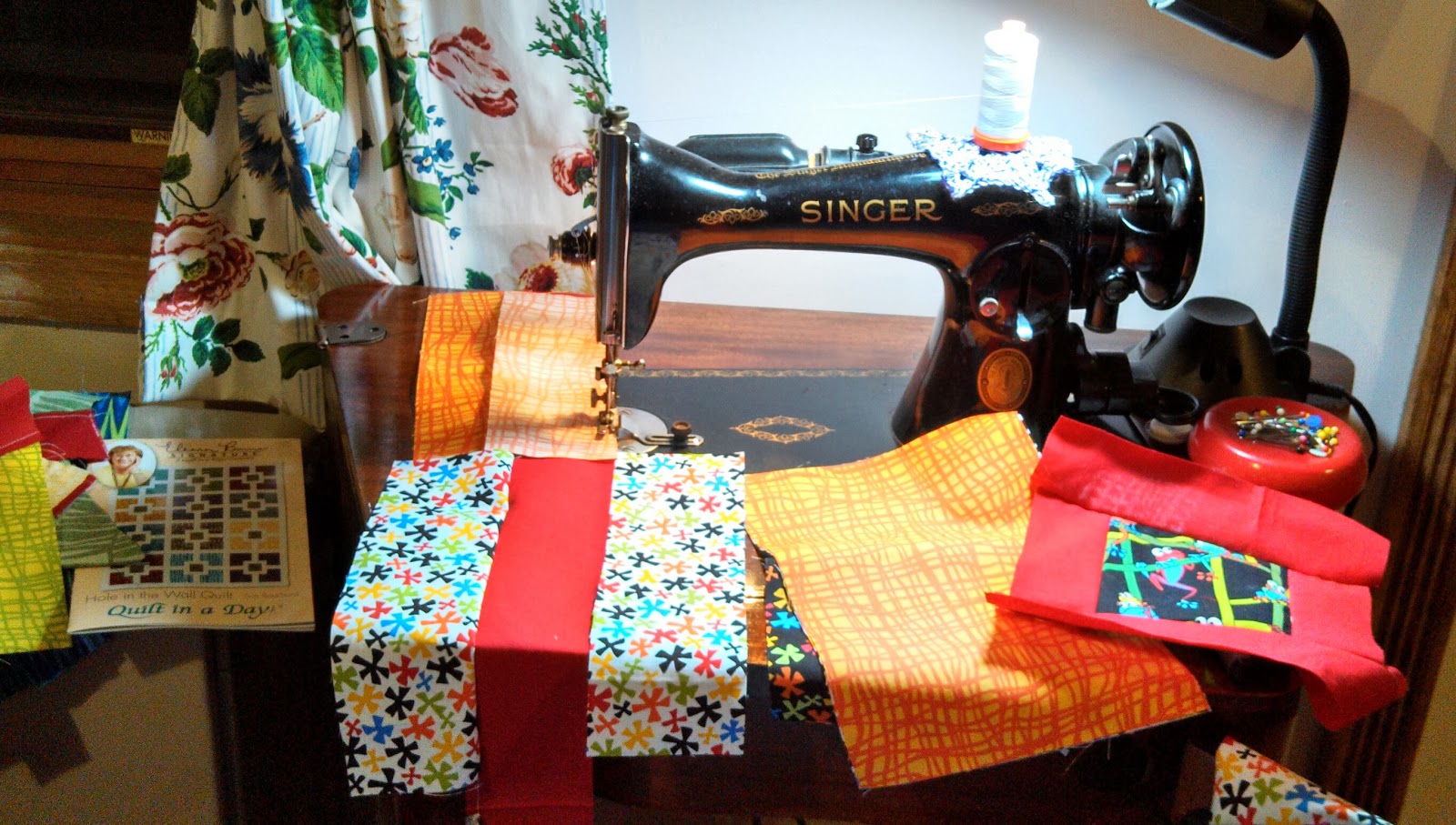 Just for fun, I started piecing the quilt on my vintage Singer 15-91, a machine from 1954.  I wonder if the person who built this machine ever thought it would be working 60 years from then, or sewing such a modern designed fabric.

I need to get another photo in daylight, but here are the pictures for now. 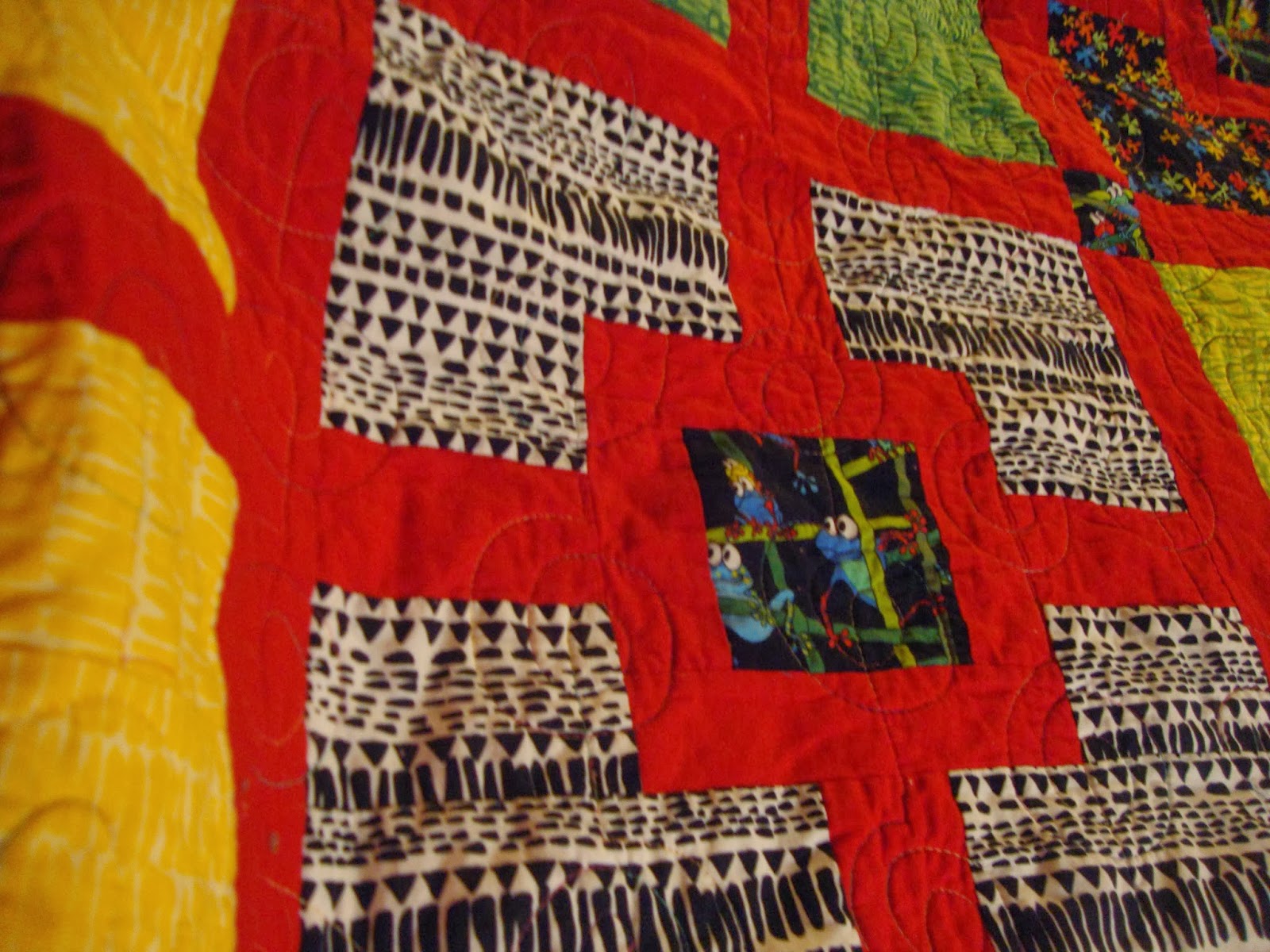 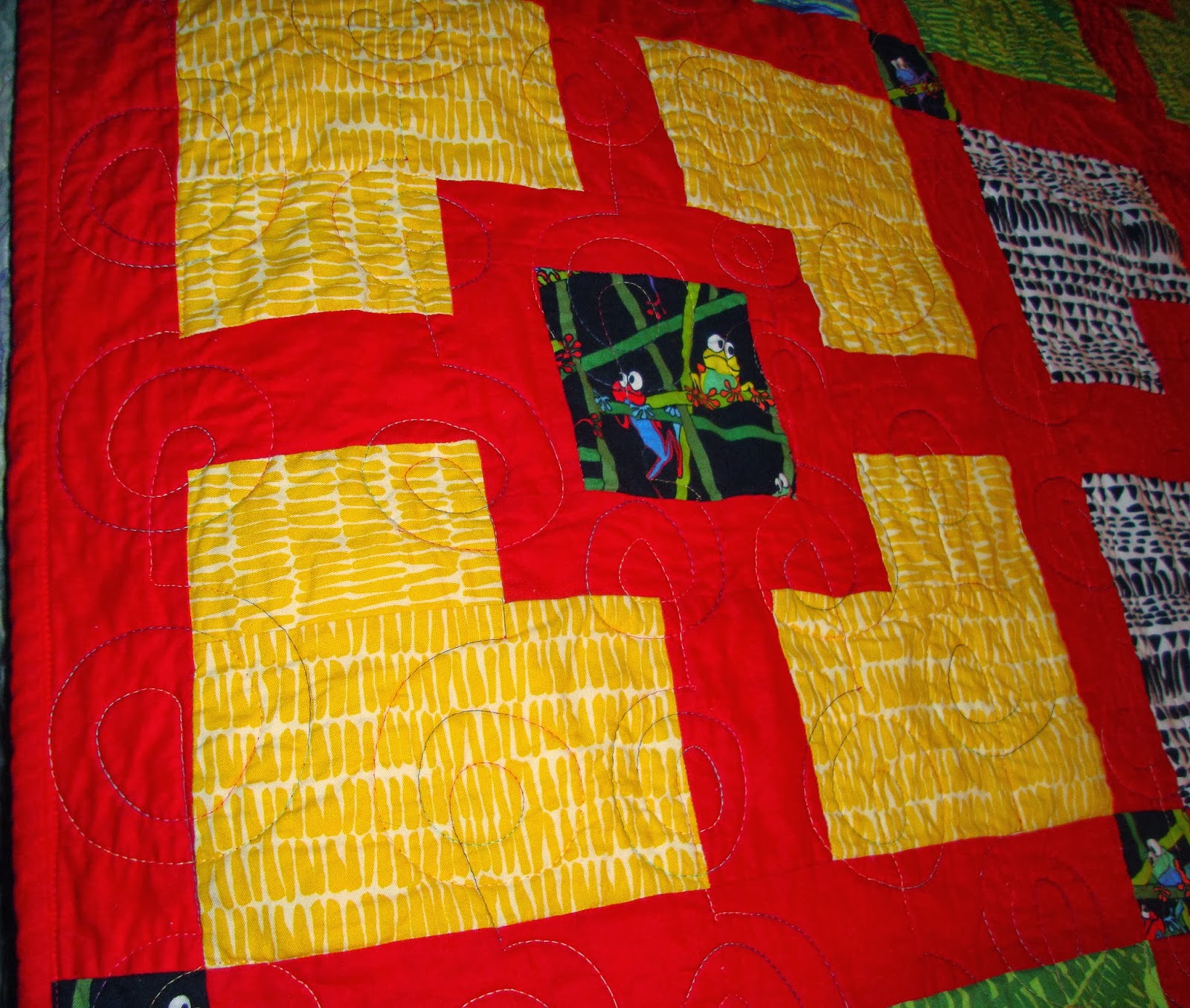 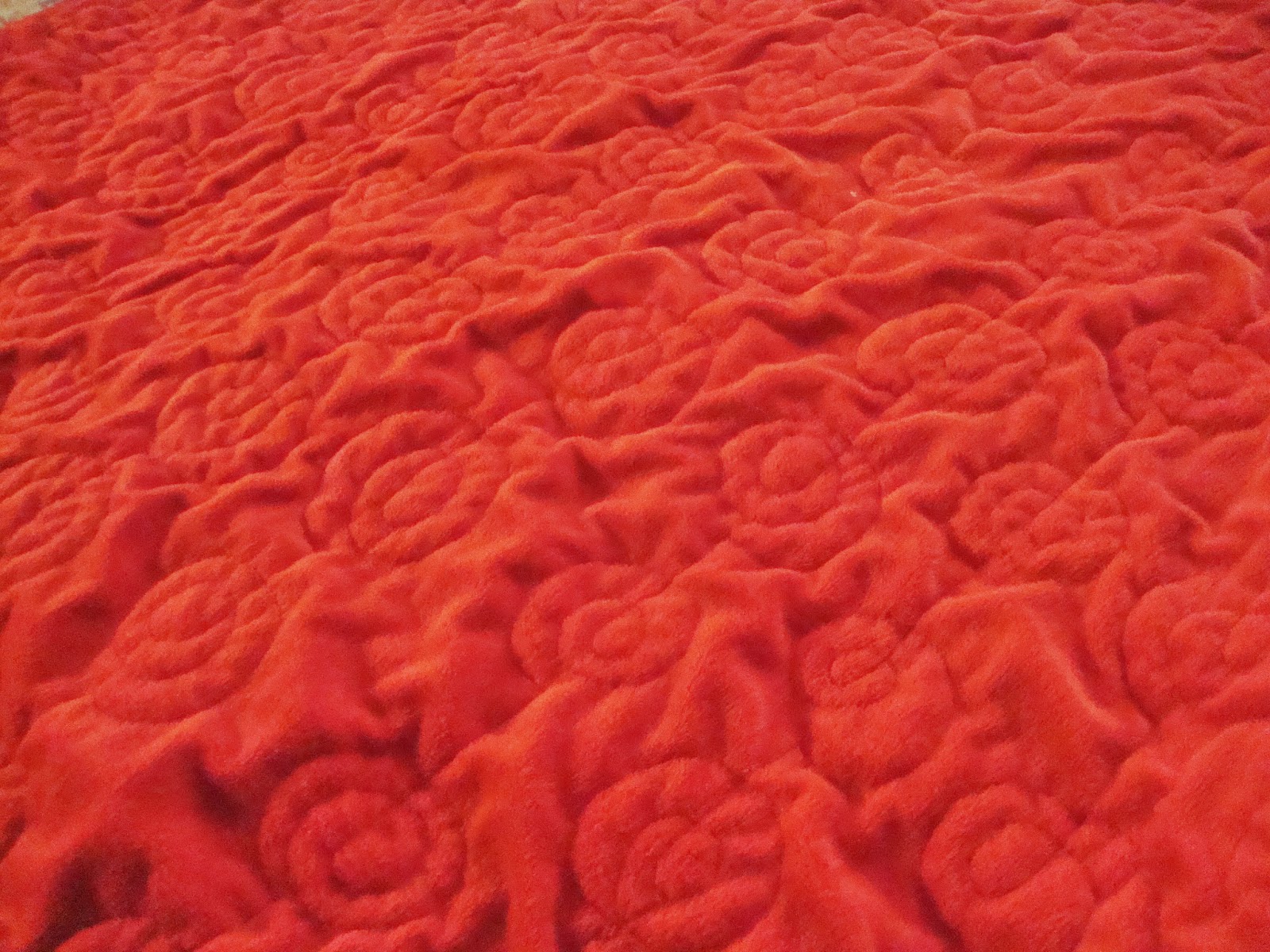 The back was a bit smoother before I washed it, but I love the soft minkee, and how the swirls look.

Note this!! I didn't prewash the polyester minkee.  I DID test the red Legacy solid from JoAnn, and didn't think it would bleed, but I think it did.  I added 3 Shout Color Catcher sheets to the wash.  For some reason, the top had lots of lint on it.  I wanted to make it look better, so washed the quilt, and I'm glad I did.  These are the color catchers after washing. 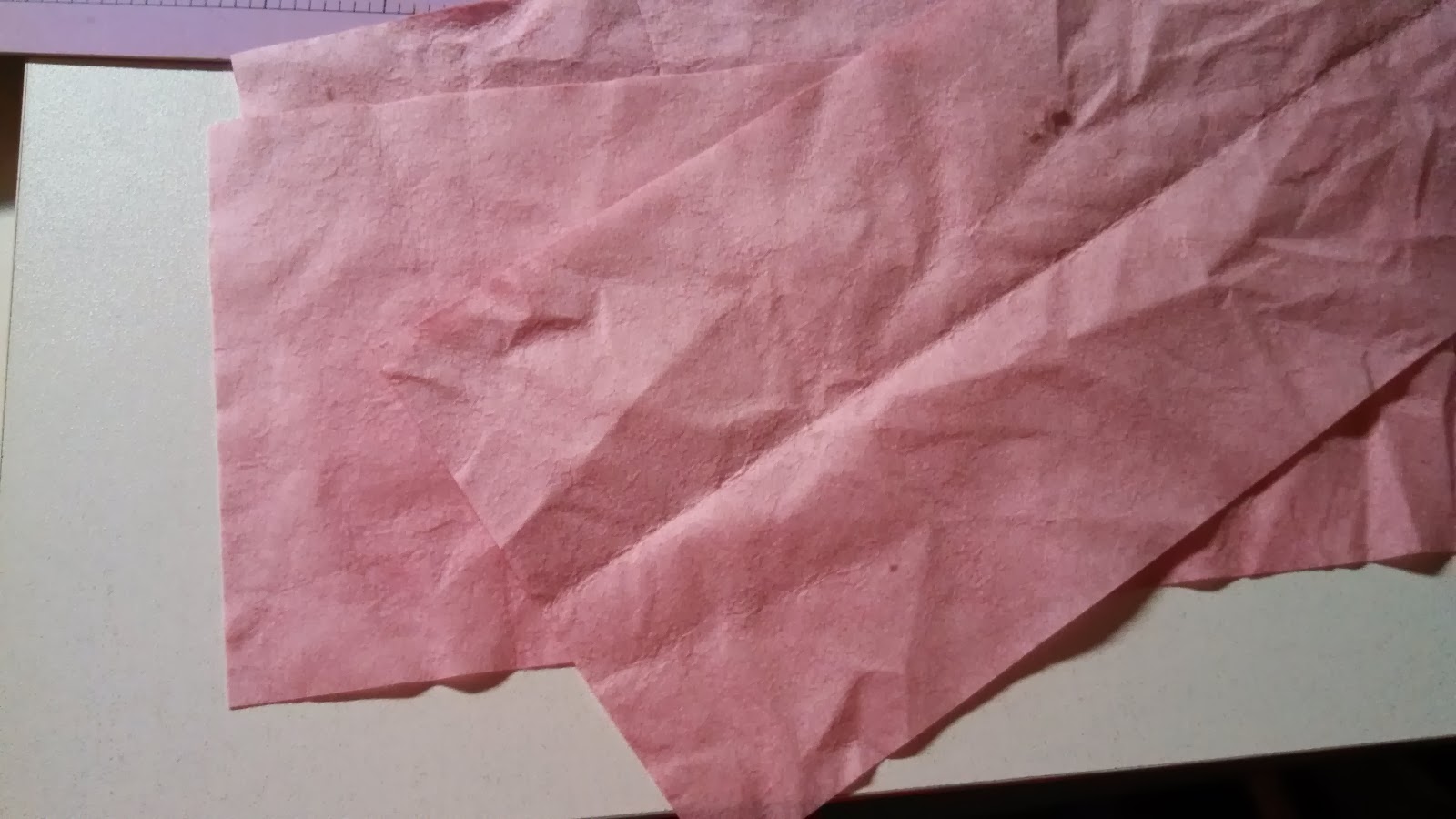 I'm so glad that I know the quilt should probably not run again, but I'll tell Teri tomorrow.   I put a label on the back, but need to fill out the baby's name after he or she comes, hopefully in early March.

And I won't be buying Legacy solids from JoAnn's again.  I'm going to stick with Kona or Bella from Moda.

Adding a new picture taken Sunday, before the shower, in daylight. 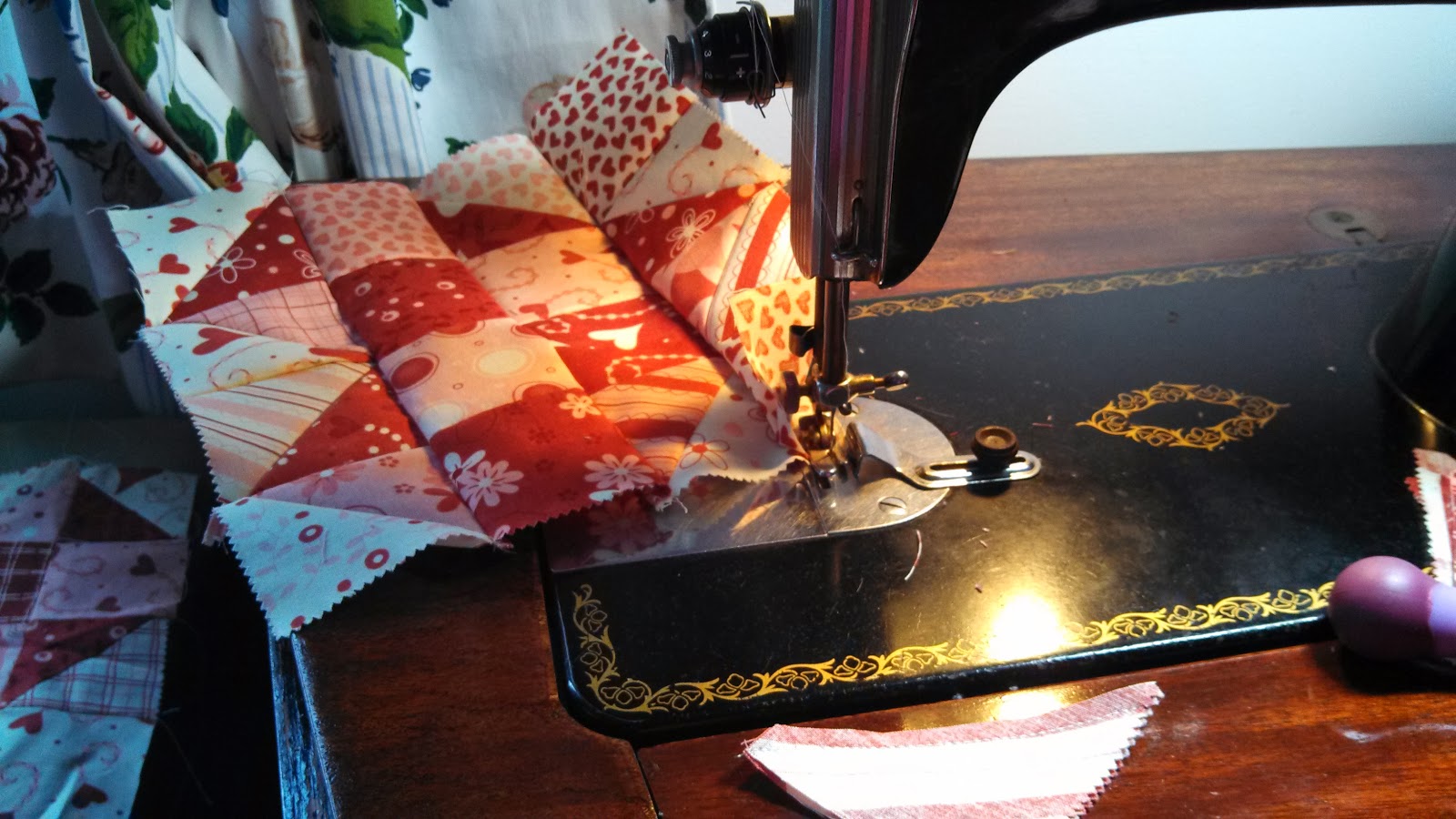 A beautiful and colorful quilt for a little boy or girl. I'm sure it will be loved. Sorry about the running, never fun! Have a great day!

The quilting looks great. It came out really nice and I hope Terri (and her mom) really like it and appreciate all the hard work you put into it. I am glad you washed it with the color catchers.

Adorable baby quilt!!! Sorry about the colors running...but thanks for the heads up on those fabrics. I usually stick with Kona too.

Love the frog fabric...who makes it and who is the designer? I am always on the lookout for frog fabrics for my pillows!

Great job, ME, the back looks so soft and comfy! Thank goodness for color catchers!

Beautiful quilt and I have started using the color catchers all the time too. Love your 15-91......I have 3 of them and use them for piecing and quilting all the time!