A number of years ago, I saw a quilt pattern that caught my eye.  I didn't buy the pattern, but did save a picture of it.  When I got EQ7, the quilt design software, I figured out the layout and worked on designing a different border.  That sat in the files for a while, and I started collecting a variety of blue snowflake prints with silver metallic accents.  But as I collected, I didn't notice how many yards of each blue I would need.  Eventually, I put the correct yardage into a project bag, and worked on other things.  Last December, I cut and pieced the quilt top, and had it ready for quilting.  Then it sat again, while I worked on my Free Motion Quilting stitching skills, and contemplated the designs.  I also continued to look for a suitable binding fabric.

Inspiration struck in November of 2013, and I began quilting, and had huge issues with the silver metallic thread I was using.  Broken needles, huge knots and nests on the bottom, broken thread, etc. (See previous blog posts).   I decided to try Superior Metallic thread and titanium Topstitch needles, and that worked much better.  I didn't break any needles, and had only 3 knots, and a few breaks.  The other thread, I had knots and breakage every few inches.  I recommend Superior Metallics if you choose to add sparkle to your designs.

So, here are some pictures.  I still need to add the label, and have to decide on the name.  This one is a keeper.  I worked too hard, and learned so much, and love blue and snowflakes.  The pictures don't show how beautiful it really is, and how good the quilting looks.  I really had fun, once I got the right thread.

This was pieced with Aurifil 50wt cotton, and in the (maybe 12?) bobbins for quilting.  Lots of Aurifil! 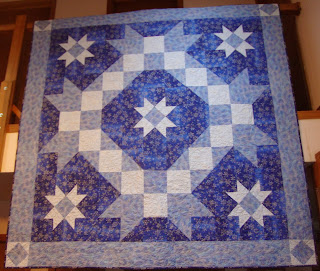 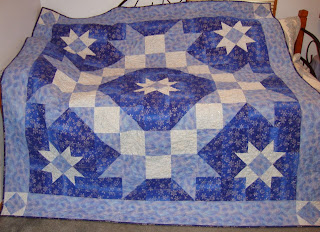 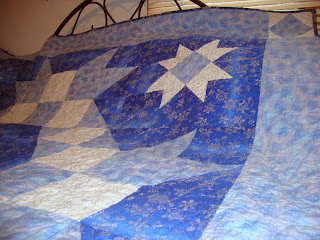 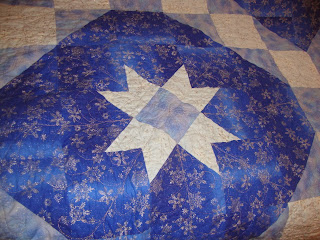 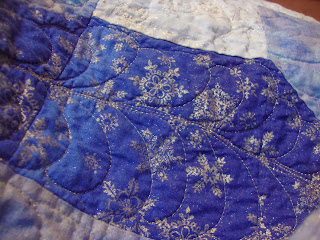 Superior Silver Metallic in the feathers and swirls. 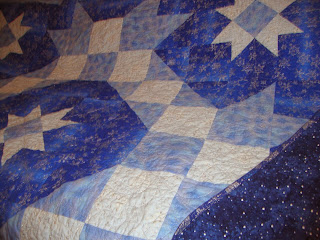 A shot with a little of the backing and binding.  Swirling snowflakes!  And no need to shovel.  This is for mine!  I'm keeping it. 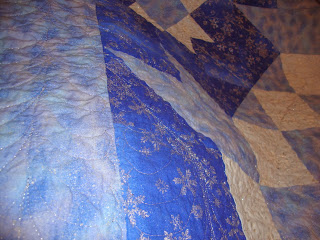 Posted by teachpany at 4:51 PM

Gorgeous! Just my colors, too ;) I don't blame you for keeping this one for yourself.

This is absolutely beautiful Mary! I am so glad you are keeping it for yourself. So often we quilt for others and overlook "gifting" ourselves! I just got EQ7 for Christmas, so I am just going to have to get over my fear of pressing the wrong icon and get to work! Thanks for sharing, and congratulations on finishing it!

So glad you are keeping it! Its lovely!

It's beautiful ME!!! The blue is so pretty. I am glad it's for YOU! Enjoy.
~Sues

WOW! It's gorgeous! Love it! No doubt you had fun making it, it's a beauty you will love forever.
Congrats on finishing a UFO! I have two big ones to finish.. don't know when that will be! :)

Lovely quilt, you should be proud!

Gorgeous quilt! Love the colour scheme and those feathers are amazing!