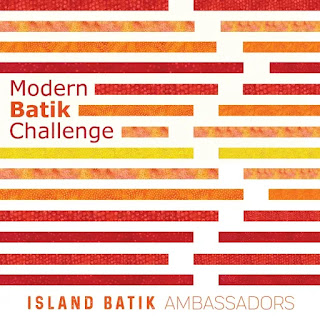 Hi.  It's been a while since I blogged, but I was busy sewing secret projects for Fall Market for Island Batik.  I can say I finished a large lap quilt, which will have a pattern, and uses 10" squares, plus a table topper and placemats that use FQs and a Funky Friends Squirrel and a hedgehog, plus have another quilt in the works for Market and a pattern.  This one uses yardage.  There were also personal issues, mostly about being a caregiver for my mom.  She's fine, but let's just say that family can be a problem.

On to today's Island Batik Ambassador challenge.  I'm never sure if I can do something that's modern enough.  I do like to play with colors and alternative gridwork.  I've pushed myself out of traditional because I work with batiks on a regular basis, and now I'm designing with them.  I must admit it's been lots of fun, and I love being pushed to be creative.  As a designer, I often submit an idea for one collection or group of colors, and Island Batik suggests a different collection, which pushes me into colors I wouldn't normally choose.  Their color choices are awesome, but not always my ideas.  For example, I don't think to pair orange with purple.  But look below for an example of where it works.

I'm working on a new pattern, which was shown at Market in May, called Jungle Jumble.  It uses the Jungle Cruise collection.  I wanted to show the units can be assembled differently.  So, my idea was to choose another collection and make the top again.  The Ambassadors were  asked to make larger than a baby quilt, so I'm working on a lap size.  I wanted to show the colors, though, and some alternate ideas for using the units in my pattern.  I hope to have the pattern written soon, and will let you know when they're back from the printers, but here's a taste of the possibilities. 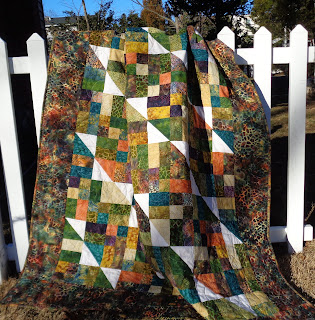 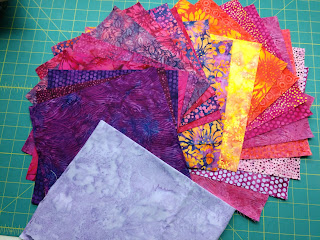 I had purchased this 10" stack of beauties called Twilight Sunflowers from Missouri Star, for this purpose, but wasn't planning on doing it as a challenge. It kept calling me, though.  I picked 1/2 yard of Lavender from our Ambassador box as the "background" or constant.  I cut up the squares for my design, and had fun sewing them back together.  Using a colored constant instead of my usual white/cream choice was different, and I hoped would add a more modern look. 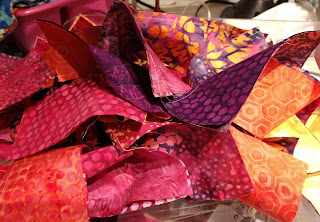 Lots and lots of chain piecing happened.  I love the calming hum of the machine as I feed through the fabric.  I also enjoyed picking the pieces to match up, and love using Aurifil 50wt thread for this.  I have a large cone that I got last year as an Aurifil Artisan. I've used about 2/3 of it, and filled lots of bobbins, but not having to worry about a spool running out is awesome!  I can sew until I need to replace a bobbin.  Just keep going and going!  So much fun.

Once I got all the units made, I decided to play.  I opened EQ8, imported Jungle Jumble from EQ7, and played with a row design.  I used all the possible units, but it's not colored correctly to go with the scrappy actuality.  You can get an idea of one option, though. 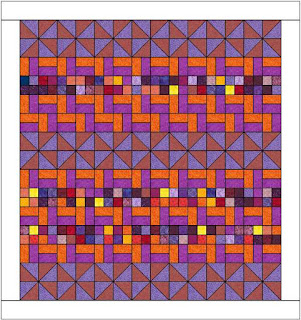 I played with the units in person, too.  I laid them out with a center medallion idea of pinwheels, and border rows.  If I chose this, I might do a single fabric border between the 4 patch and 2 patch ones.  It's a little too busy right now.   The eye needs a place to rest. 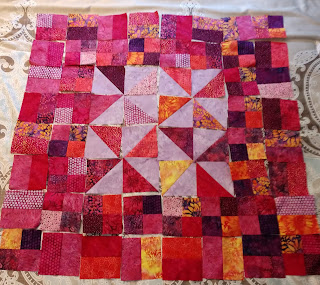 This would make a few fun baby quilts, if I chose to go with this idea.  I do like it, and the colors are so pretty, but I decided to do something else, which you'll see soon.  I promise!

In the meantime, there are lots of great inspiration for you at the Island Batik Ambassador blogs.  Please visit them!

On the Yippee!! news front, my first design for Island Batik, Zen Basket, has returned to me.  It's been traveling all over the US with the trunk show, which provides shops with samples of the fabric and patterns available.  This was most recently in Portland, Oregon.  I almost wish it had a stamped passport so I would know where it actually went during the last year and a half since I finished it.  The patterns are still available in my Etsy shop. 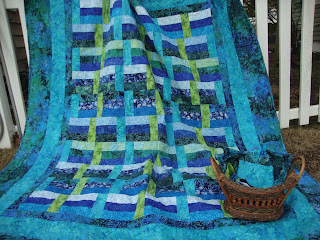 I may be listing this quilt for sale.  I haven't decided if I can part with it.  It's my first completely original design, with the pattern written for others.  Like my first baby! lol.

Anyway, thanks for visiting, and I hope you find inspiration on how to use Island Batik in a more modern style quilt.

Maryellen
Posted by teachpany at 3:34 PM

I had to chuckle about your orange going with purple as these are my colors - add a little lime green or hot pink to the mix and....well, you are so speaking my language. I love your choice of fabrics, I think they played nicely with your modern remake of Jungle Jumble. Can't wait to see your "secret sewing" at Fall Market!

Can't wait to see how this one finishes up! Love the summery colors!

Great color choice, it will e interesting to see when it is finished!