What do you do with the extras?

When I design a quilt, I calculate exactly how many blocks to make so I don't waste fabric or have extras.  Occasionally I've had to make one more, or end up with extra parts, but seldom do I have enough for another project.  Maybe there are scraps (eventually I'll do something with them) but I'm usually pretty good at not being wasteful. 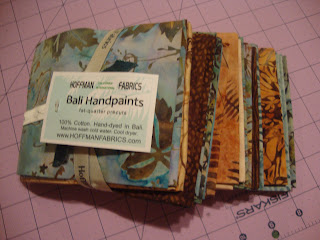 I recently won a beautiful assortment of 14 fat quarters (FQs) from Hoffman of California for posting a comment on Facebook.   I looked for patterns that would effectively use the assortmet, and liked the look of Atkinson Design's Yellow Brick Road pattern.  The cutting uses almost all of the fabric.  I only needed 12, so I pulled out the darker teal handpaint and the really light cream one.  The pattern was pretty easy to follow, although I did sew 12 blocks when I needed to only sew 6 of that version, and had to unsew the pieces to use in Block C.  The directions could have been a little clearer in my opinion. 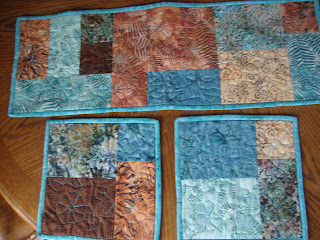 So when all the blocks were finished, I realized I had 5 extra.  I could have made the quilt longer, but for a lap size, it was already long enough.  I took the 5 extra blocks and made some snack mats or mug rugs, and a small table runner.  I like having quick projects to practice Free Motion Quilting on.  I picked a flower shape to try, and added leaves.  I think it came out cute, and would be perfect on a small kitchen table, or snack bar, or even coffee table.  Where else do you suggest? 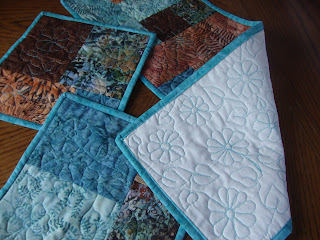 What do you do with extra blocks?  I'm also glad I checked the measurements for the border before cutting.  I use the Robert Kaufman app for my Droid phone and cut one less strip.  I was able to use the fabric for binding the mats and runner.  I hope to get the quilt top pinned Monday and will work on quilting it this week.  The mats and runner are listed in my Etsy store.  I'll have to do something with some of the other little blocks I have.  It was fun to make this!
Posted by teachpany at 3:57 PM

extras? What are those? I never calculate before cutting. I always have leftover pieces and those just go into the next quilt. I'm a scrap quilter, so everything and anything is fair game. Nothing is ever purchased especially for a quilt with exact measurements in mind and I have tons of fabric that is gifted to me so there are always extra pieces of fabric everywhere. My inspiration for the next quilt often comes from looking at all of the fabric and trying to see what goes together.