A Quilt for my son

My son is now 24.  This isn't his first quilt, but I was surprised he didn't remember the first.  It meant a lot to me, as it was the second class I took for quilting.  I made him a twin size Amish Quilt by Quilt In A Day.  It was rainbow brights on a black ground, and I still have it.  It didn't wear well, since I probably used poly-cotton fabric (it was made about 20 years ago) and it was only tied, not quilted, but he saw it recently and said he forgot.  He knows I've made many quilts since, and given some to others, so he wanted a new one.

I asked him to pick out a book, and he said he wanted blues.  He picked the Double Irish Chain by Quilt In A Day, and I picked out batiks from Timeless Treasures, since my wholesale friend can get them for me.  I started this before Christmas, and the main part of the top was completed to show him on Christmas morning.  I had his usual pajama gift, too, but since money is so tight, I told him this was it.  Even with the break on the price, the fabric cost more than $90 for the top!  The backing was another $25 (yeah for wide Roc-Lon premium muslin at wholesale prices) and the batting was another $40.  The quilt measures about 104 by 120 inches.  It's HUGE!!

It's all pieced with Aurifil 50wt Mako cotton thread, and I used my Viking Sapphire as well as my vintage Featherweight, depending on where and when I was working on the top.  I did have a challenge doing the 9 patch corners, since there was a typo in the book.  For me to solve an issue, I need to let it "veg" in my brain for a bit.  If I get frustrated, I need to set the problem aside until I can ponder the answer.  In this case, it sat for a few months.  I finally pulled it out again and looked at the pictures in the book, and compared them to my fabrics, and was able to finish the top.  I love being able to spread the whole thing out on the huge work table at Enright's, and that Bernie will come help me pin the layers.  She's truly a gem!

So, here are some pictures.  My plan to quilt includes straight lines down the "chain" blocks, on the diagonals, which is traditional in this style quilt.  I'll use some sort of stencil on the 'background" blue blocks, and I have something planned for the borders.  I'll do another post when it's all done. 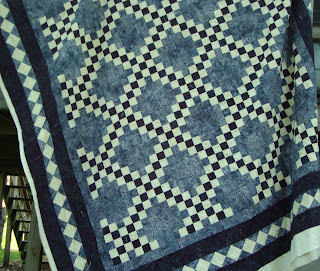 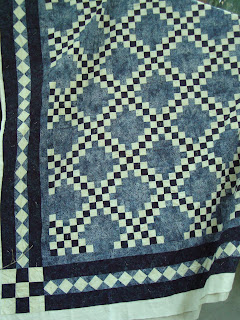 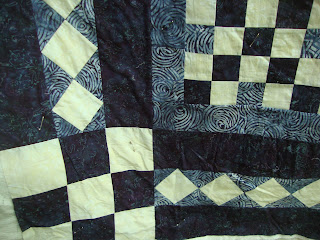 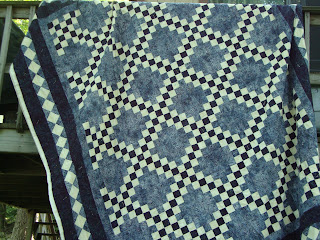 Posted by teachpany at 5:30 PM