I just realized I haven't posted for a few weeks.  What have I been doing?

Well, some issues needed to be dealt with.  My parents came to visit for a few days, and Dad and I worked on some minor repairs around the house.  We make a good team.   We replaced the cartridge in the leaky bathroom faucet, instead of replacing the whole faucet.  I wanted to do the Cold side, too, but we couldn't get that handle screw out.  We played with the doorbell, to see if it was working, but there's a short.  Dad has an idea what to do next time he comes.  We made a temporary fix to the garage door, too.  It's pretty rotted in the bottom right corner, and the door would get stuck going up.  I hit my head a few times going under it, which will probably make you laugh, but isn't really funny! lol.  We used a few metal L plates and T plates to get it back closer to square, so now it goes up completely.  I can't bang my head. so I'm thrilled.  I really need a new door, but that isn't in the budget.  The repair cost about $10.  I use this door all the time to enter and leave the house.  It's right off the basement, and makes moving my machines from the sewing room to the car very easy.  My sewing room is in the back of the basement.  It's also the easiest for bringing in groceries.

I won a photo caption contest on the Facebook page for Eharmony, and have been playing with my free membership on Eharmony.  No luck yet, but having fun.

I did make a "quilt as you go" table runner.  And my iron died, so I researched prices, makes, and stores to determine the replacement.  I actually ended up with the same iron, a Shark professional, but only because the others I saw didn't have the features I wanted.  I'm going to keep looking, though.

I also did pillows for an order, and did piece some other things, and cut out another project.  It's been a little productive, but no big finishes to show.  I have sold a few things, mostly fabric and a crocheted baby blanket, on my Etsy store, too.

Here's the runner, though.  It's really pretty in person.  The center square is white.  It's called a Braid runner. 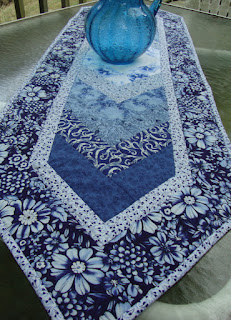 I also did the block for the Quilt In A Day Treasure Chest quilt.  It's called Grandma's Tulips. 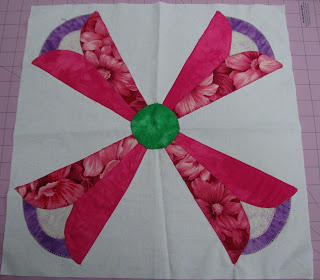 Hopefully there will be more to write about soon.  Christine and I plan to do a little Quilt Shop Hop next week, so I'm looking forward to that.  Thanks for checking in!
Posted by teachpany at 7:50 PM