Quiltsy Team has a few challenges a year, and this month's challenge is to make something scrappy, table runner or larger.  Sounds easy?  Like a "must do"?  I thought so, even though I already had 2 projects due at the same time.  There will be a chance to vote on your favorite.  I do have scraps, and had ideas about using the scraps from a purple, black and white quilt I did last year.  But those scraps were in a basket under a box behind a mess, lol.  I was in the process of making the 63 foundation pieced squares using Island Batik Freedom for a secret project, and had some pieces left over.  They had originally asked for a 70 block quilt, then changed it, and I had some squares cut, plus left over pieces from cutting the strips to the right size.  So I grabbed them and started sewing 4 patch units.  I had no plan at first, which is NOT my usual way of designing.  I ended up making 16 patch blocks by sewing 4 units together, and paid attention to which way I placed the blue and red patches.  I then played on EQ8 to see what I could do with some of the longer strips I had.  I kind of wanted to play with a Log Cabin type design, so just sewed blue strips against the red patches, and red against the blue.  When I placed the 4 blocks next to each other, I really liked the opposite L that showed up.  I added red border to the blue side, and blue to the red, which further accents the L shape.  I placed this on my new Handiquilter Amara aka Vanna the Longarm. with scraps of Warm and White batting and white fabric from Island Batik.  I chose the 3 Tours Wavy Stripe on the Prostitcher, and Aurifil Liberty, red, white and blue 50wt variegated thread.  I learned so much about resetting the machine and doing an edge to edge design as this was stitching.  For some reason the thread kept breaking, so I needed to rethread and reset the machine.  A few too many times, but I have ideas to help for the next few quilts that I plan to use that thread for.  It was a good lesson, though.

Here are more photos of the quilt, as well as the quilting design. 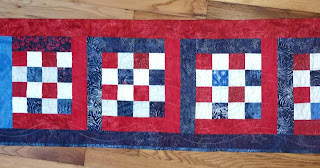 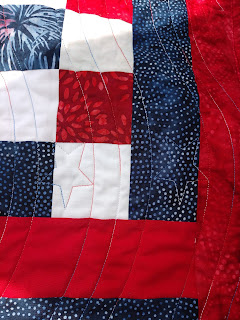 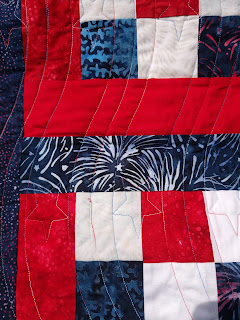 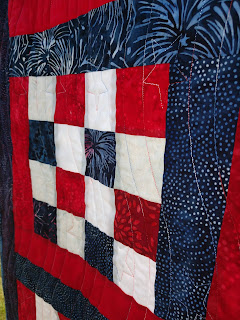 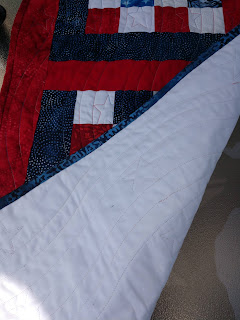 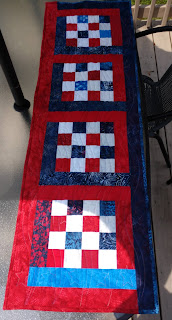 I'm so excited to have finished this, and have it listed in my shop.  I do have more blocks made and probably will come up with something fun with them.  I am also working on another quilt using Freedom, and have an idea for those scraps, too.  Maybe some place mats will be coming soon.  Or something else.  That's part of the fun in making something from scraps.
I'll let you know when you can vote for your favorites.  Watch my Facebook page to see the others.
Thanks for visiting!

Posted by teachpany at 8:51 PM

So beautiful and Patriotic. I absolutely love it and love this Patriotic fabric collection from Island Batik.

It looks great. I like the stars you quilted.